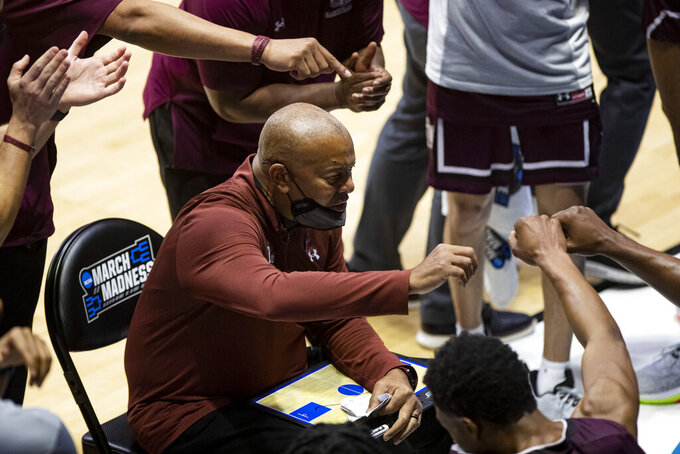 Texas Southern head coach Johnny Jones talks to his team during a timeout in the second half of a first-round game against Michigan in the NCAA men's college basketball tournament, Saturday, March 20, 2021, at Mackey Arena in West Lafayette, Ind. (AP Photo/Robert Franklin)

WEST LAFAYETTE, Ind. (AP) — Juwan Howard loved playing in the NCAA Tournament. Sharing that experience with his players was pretty sweet, too.

Howard got the win in his first NCAA tourney game since taking over at Michigan, guiding Mike Smith and the top-seeded Wolverines to an 82-66 victory over Texas Southern on Saturday.

Smith scored 18 points and Hunter Dickinson added 16 as Michigan rolled into the second round without Isaiah Livers, who is out with a foot injury. Eli Brooks and Brandon Johns Jr. had 11 points apiece.

Howard is back in the tournament for the first time since his stellar playing career with Michigan, including back-to-back Final Four appearances in 1992 and 1993. It's his second season in charge, but the NCAA Tournament was canceled last year because of the pandemic.

The Wolverines also had to deal with a long layoff this season because of COVID-19 issues in their athletic department.

All the adversity made the March moment even more enjoyable for Howard.

“It means a lot because of what this group has dealt with since last year when we had a pause,” he said. "No one can control the virus but we’ve done a really good job of now having this opportunity to play, being disciplined throughout the process and sacrificing a lot. I’m so proud of these kids and what they’ve dealt with this year.”

Howard and the Wolverines (21-4) had little trouble with the No. 16 seed Texas Southern, but the absence of Livers could lead to adversity down the road. Next up is No. 8 seed LSU on Monday.

“I like how we came out aggressive, played defense,” Smith said. “We played really hard. What I didn’t like was we kind of let up, we kind of played the score and they came back. Obviously, there were some calls that didn’t go our way. We can't let that hinder us, affect us in a way where we play to their pace.”

Livers, a 6-foot-7 senior forward, is sidelined indefinitely with a right foot stress reaction injury, and he ambled down from his seat to timeout huddles while wearing a protective boot. He also wore a black T-shirt with the slogan #NotNCAAProperty, part of a social media effort to raise awareness about inequities in college sports.

The Wolverines used their depth to replace his 13.1 points per game and floor leadership against the Tigers (17-9).

Michigan never trailed in building a lead that reached 24 early in the second half. The 7-1 Dickinson provided the inside power against the smaller Tigers while Smith and Brooks offered long-distance punch by knocking down 3-pointers.

It wasn’t perfect as Texas Southern outscored Michigan 42-30 in the paint and got within 12 late, causing Dickinson to re-enter the game. Dickinson fouled out, but the Wolverines had more than enough to close it out.

Michael Weathers had 24 points and John Walker III finished with 11 for the Tigers, who were coming off a First Four win over Mount St. Mary's that gave the Southwestern Athletic Conference school its second NCAA victory.

TSU faced a much taller task against a Michigan squad bent on rebounding from its Big Ten Tournament semifinal loss to Maryland. The Tigers stayed close for the early minutes before the Wolverines eventually pulled away.

Texas Southern: The Tigers drove their way to paint points. That was needed with their perimeter game finishing just 1 for 12 from behind the arc. And their spirited rally came too late to matter.

“If we had played with that intensity in the first half, in the first four minutes, I think it would be a different game,” said Weathers, who finished 8-of-18 shooting. “Those eight minutes, we just dug too deep of a hole to come back from.”

Michigan: The Wolverines won the glass 38-28 and forced 10 turnovers leading to 19 points, which helped them lead throughout. They need to finish better as the road becomes tougher from here on out.