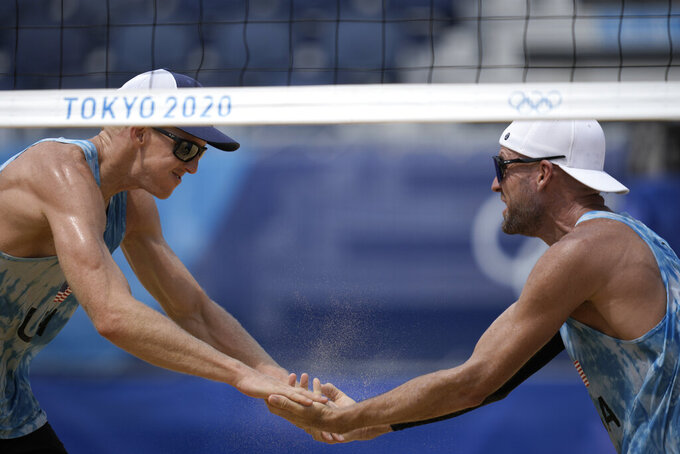 TOKYO (AP) — Americans Jake Gibb and Tri Bourne got thrown together so quickly on the eve of the Tokyo Games they didn’t even have time to figure out the traditional post-point high-five that all beach volleyball teams do, with varying degrees of choreography.

“I’ve learned to just leave the hand out there and let him do whatever he wants,” said Bourne, who flew to Japan eight days ago to replace Gibb’s original partner, Taylor Crabb, after he tested positive for COVID-19 upon arrival.

Beach volleyball partnerships are more like a marriage than a business, with pairs spending most of the year together traveling, eating at a table for two and trying to work in harmony on the court. Many players say they spend more time with their teammate than with their actual spouse.

And, like marriages, some of them don't work out.

The sport’s lore is filled with stories of pairs that split up because they couldn’t get along off the court; each breakup has a trickle-down effect, as the newly divorced teammates scramble to find new partners.

“It's like high school dating,” said American Phil Dalhausser, who won a gold medal in Beijing with Todd Rogers, then paired up with Nick Lucena when Rogers retired after the London Games.

The end of each Olympiad sets off a mad scramble of partner switching, as players retire and leave teammates in need of a replacement and others simply realize their relationship has run its course.

“It is a job. You’re here, and you want to win,” said Canadian Heather Bansley, who played in Rio de Janeiro with Sarah Pavan but is in Tokyo with Brandie Wilkerson. “But on the other hand, you spend a lot of time with that person and you want to maybe like your job.”

Although many of the athletes who competed in Rio made it back to the Olympics, just two of 24 women’s teams and six on the men’s side return intact. The breakups include all three women’s teams that reached the 2016 podium and the men’s gold medalists Alison and Bruno Oscar Schmidt.

Among those sticking together: Elsa Baquerizo and Liliana Fernández of Spain, who are at their third Olympics. Rio bronze medalists Alexander Brouwer and Robert Meeuwsen of the Netherlands have been together since 2011.

“We want to be the team that plays together the longest,” Meeuwsen said.

The most successful pairing in Olympic beach volleyball history was Kerri Walsh Jennings and Misty May-Treanor, who first teamed up in 2001 and won gold medals in Athens, Beijing and London. But when May-Treanor retired after the London Games, Walsh Jennings teamed up with April Ross, who won silver in 2012 with Jen Kessy.

Are you getting all of this down?

“We change so much, because we want to be here with our best team, in the best situation,” said Schmidt, who is in Tokyo with Evandro; Alison’s new partner is Alvaro Filho. “We are always thinking about which team will be more successful. That’s why we are switching so much.”

If finding the right beach volleyball partner is like dating, then consider Gibb and Bourne the couple who hooked up at last night’s party and then decided to go to the prom.

Although they had never competed together before their Tokyo debut, they guaranteed themselves at least one more match with Wednesday's win.

“I always expect a lot out of myself, so it doesn’t matter who I am on the court with,” Gibb said. “I mean, this is the Olympics. We’ve worked hard for this, both of us.”

Gibb said Wednesday’s match was a B-minus, but that was an improvement over the C-plus performance in their opener on Sunday night, when they hit the sand after practicing together just three times.

“Listen, we both play beach volleyball for a living; we know how to play this sport,” Gibb said. “Yeah, we need to grow. But, absolutely, we can grow. We’d better grow.”

Bourne’s Tokyo hustle was also a challenge for Lululemon, which makes the team’s uniforms. But sure enough, the newest Olympian was able to take the sand for their matches wearing a tank top with his own name on it.

He had been prepared to wear Crabb’s if it had come to that.

“I would have been showing a little midriff maybe,” the 6-foot-5 Bourne said, referring to the 6-foot man he replaced. “But I would have worn it.”

In other women's matches Wednesday, Nina Betschart and Tanja Huberli of Switzerland beat Japan 14-21, 21-19, 15-12, Latvia beat the Brazilian pairing of Ana Patricia and Rebecca 21-15, 12-21, 15-12, and Russia beat Cuba in straight sets. On the men's side, Spain beat Austria in straight sets, Qatar did the same to Italy and Russia swept Norway.