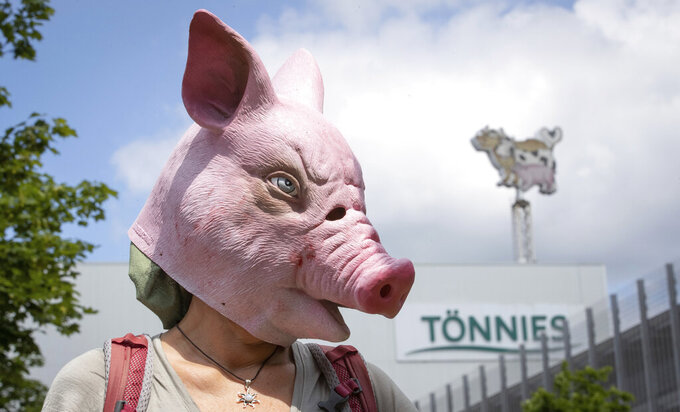 Animal rights activists protest in front of the Toennies meatpacking plant and slaughterhouse in Rheda-Wiedenbrueck, Germany, Saturday, June 20, 2020. Hundreds of new coronavirus cases are linked to the large meatpacking plant, officials ordered the closure of the slaughterhouse, as well as isolation and tests for everyone else who had worked at the Toennies site — putting about 7,000 people under quarantiner. (Friso Gentsch/dpa via AP)

BERLIN (AP) — It’s bad enough that Schalke is going through its longest ever run without a win in the Bundesliga.

But the German soccer club’s chairman Clemens Tönnies is also under fire after a huge outbreak of coronavirus infections at one of his company’s slaughterhouses in the west of the country.

As of Sunday, 1,331 workers at the Tönnies Group’s site in Rheda-Wiedenbrueck had tested positive for COVID-19 and another 4,568 negative. A further 240 test results were expected on Monday.

As Schalke’s game at Wolfsburg was kicking off on Saturday and the team was bidding unsuccessfully to end its club-record 14-game ru without a victory, Tönnies stood before TV cameras to try to explain how the outbreak could happen. The source of the infections still isn’t clear.

Neither is the reason for Schalke’s ongoing failure to win a game. Against Wolfsburg on Saturday, coach David Wagner made four changes from the side that lost 2-1 in Frankfurt in the previous game, but to little effect as it lost 4-1.

Goalkeeper Alexander Nübel, the side’s former captain until it was announced that he will be joining Bayern Munich next season, gifted Wolfsburg its fourth goal after punching a corner straight to Wolfsburg winger João Victor.

“We met an opponent on a different level to us at the moment,” said Wagner, a former United States international.

Wagner’s team was just one point off the Bundesliga lead in October. Schalke’s fall began with a 5-0 defeat at eventual champion Bayern Munich in January and the side hasn’t won a game since. It is currently 11th in the 18-team division with nothing but pride at stake in the final game of the season against Freiburg on Saturday.

On-loan Everton defender Jonjoe Kenny picked up his fifth yellow card of the season against Wolfsburg, meaning he will miss the game against Freiburg and probably never play for Schalke again.

But the Tönnies virus outbreak is deflecting attention away the team. The outbreak pushed the number of cases in the region far above the government’s threshold for emergency measures – 50 new infections per 100,000 inhabitants in a week. Local authorities quarantined Tönnies employees and closed schools in the area, but resisted re-imposing a wider lockdown.

Previous clusters of COVID-19 cases among slaughterhouse workers across Germany highlighted grim conditions in the industry, which relies heavily on migrant workers from Eastern Europe.

“The Tönnies disaster is a failure at various levels,” local politician Sebastian Hartmann told the Handelsblatt newspaper on Monday. “Company head Tönnies and state governor (Armin) Laschet are both responsible. Neither did anything or did it too late.”

The affair could impact Tönnies’ standing at Schalke, particularly after he was heavily criticized for racist comments he made about Africans at a public meeting in Paderborn on Aug. 1. He was speaking as head of the Tönnies Group, the meat-processing giant with around 16,500 employees. It posted revenues of 6.65 billion euros ($7.45 billion) in 2018.

Schalke defended Tönnies at the time. He stepped down for three months but there were protests from Schalke fans, many of whom called for him to go permanently. Tönnies has been chairman of Schalke’s supervisory board since 2001.

However, due to the outbreak, there are reportedly increasing voices within the club saying the 64-year-old Tönnies’ position is no longer tenable.