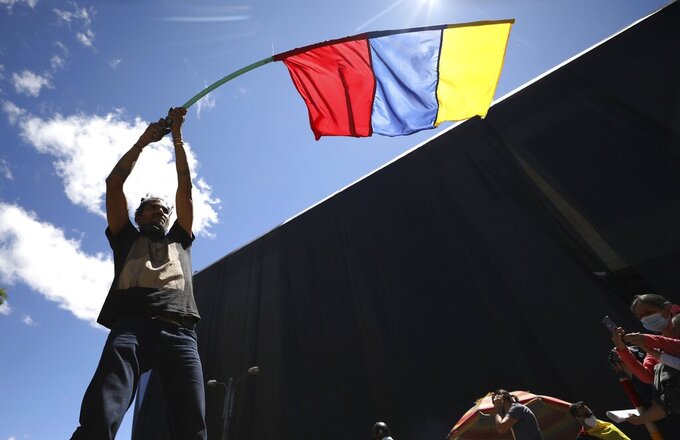 BOGOTA, Colombia (AP) — Fifty-eight people have been killed during anti-government protests that began in Colombia five weeks ago and have also led to roadblocks and clashes with police, the country’s human rights ombudsman said Monday.

In a report presented to the Inter-American Commission on Human Rights, the ombudsman office also said it had received more than 400 allegations of human rights violations during the protests that started April 28, including cases of police beatings, arbitrary detentions and sexual abuses of protesters in police custody.

Colombia’s police have come under scrutiny from human rights groups for their behavior during the protests, in which videos have shown police shooting at protesters or standing by while armed civilians fired at demonstrators.

The situation prompted a delegation from the Inter-American Commission for Human Rights to visit Colombia this week, where it will meet with government officials, protest victims and organizations that have accused the police of using excessive force during the protests.

The delegation said Monday that it will deliver recommendations for the government to follow up on at the end of its visit. It could also set up an independent commission of experts to track progress on human rights issues.

According to Temblores, a human rights group based in Bogota, police have been directly involved in 45 deaths during the protests.

Colombia's attorney general has said it is investigating police involvement in at least three deaths of protesters and has launched a probe into a recent incident in the city of Cali during which officers protected armed civilians that shot at demonstrators.

On Sunday, President Ivan Duque announced a proposal to reform Colombia’s police forces that includes putting body cameras on officers and creating a human rights directorate within the police to seek outside advice on policies. The government also said it will improve methods through which citizens can file complaints.

Protesters, however, have said they want police officers placed under the jurisdiction of civilian courts. Officers who commit crimes while on duty in Colombia are currently judged by military tribunals, which are often staffed by their own peers.

The current wave of protests started over a plan to increase taxes. The government withdrew the plan, but the protests have continued, fueled by growing inequality and unemployment during the pandemic.

Protest leaders are demanding a new set of social and economic policies that include a basic income plan for poor households and more spending on public education. They also want the police to be transferred from the Ministry of Defense to the Ministry of the Interior.

Negotiations between protest leaders and the government have been slow to get off the ground. On Sunday, a group of unions and associations that has spearheaded the protests walked away from talks with the government over Duque’s recent decision to send soldiers to 13 cities to remove roadblocks and control violent protests.

The government has asked the group to dismantle and reject roadblocks that have caused food shortages in some parts of the country and forced factories to stop working.