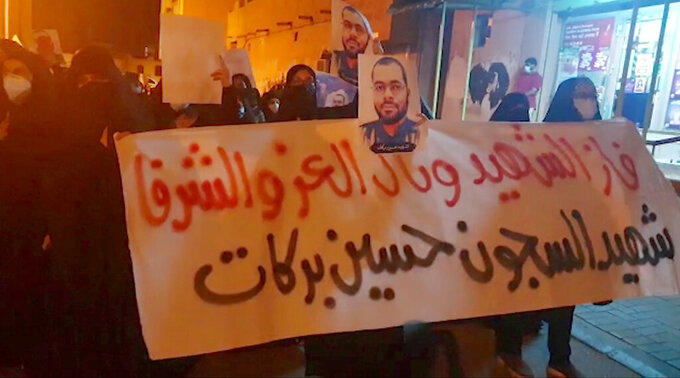 In this image made from video provided by the Bahrain Institute for Rights and Democracy, demonstrators march to protest the death of a prisoner in Diah, Bahrain, Wednesday, June 9, 2021. Hundreds on Wednesday held a rare protest in Bahrain over the death of a vaccinated prisoner from the coronavirus held by the island kingdom. The banner in Arabic reads: "The liberated and honorable martyr has prevailed, the martyr prisoner Husain Barakat." (Bahrain Institute for Rights and Democracy via AP)

DUBAI, United Arab Emirates (AP) — Hundreds have held a rare protest in Bahrain over the death of a prisoner from the coronavirus despite being vaccinated months earlier by the island kingdom.

The demonstration Wednesday night saw protesters march in the streets of the village of Diah over the death earlier in the day of Husain Barakat.

Videos of the protest, which corresponded to Associated Press reporting on the demonstrations, saw those marching shout that they held King Hamad bin Isa Al Khalifa responsible for Barakat's death over poor care.

An Interior Ministry statement said Barakat, 48, had been on a respirator and died at a hospital. The ministry said Barakat had received an unnamed two-shot vaccination for the virus.

Bahrain, like the nearby United Arab Emirates, relied heavily on Sinopharm in their world-record per-capita vaccination campaigns, but now are offering booster shots of Pfizer-BioNTech's vaccine. There have been reports of low antibody responses in the UAE, which saw that country announce in May it would offer boosters six months after a Sinopharm two-shot vaccination.

The two shots use different technologies. The Pfizer shots, a so-called “mRNA vaccine,” contain a piece of genetic code that trains the immune system to recognize the spiked protein on the surface of the virus. The Sinopharm vaccine is an “inactivated” shot made by growing the whole virus in a lab and then killing it.

Bahrain, home to the U.S. Navy's 5th Fleet, is now struggling through its worst wave of the virus. It's in the midst of a weekslong lockdown and daily case numbers have dropped recently. The island, home to 1.6 million people, has seen over 253,000 reported cases and 1,160 deaths.

Bahrain last week told the AP that 90% of new cases in Bahrain were “people who had chosen to receive no vaccinations.”

Barakat had lost his citizenship and been sentenced to life in prison in a 2018 mass trial, according to the Bahrain Institute for Rights and Democracy. Bahrain’s Public Prosecution said at the time the case involved a little-known militant group it identified as the “Zulfiqar Brigades.” Zulfiqar is the name of the forked sword of Imam Ali, the son-in-law of the Prophet Muhammad who is revered by Shiites.

Bahrain’s Sunni-rule government has wielded denaturalization and mass trials to beat back dissent on the Shiite-majority island off the coast of Saudi Arabia in the years since its 2011 Arab Spring protests.