Hundreds of Honduran migrants set out for US amid pandemic 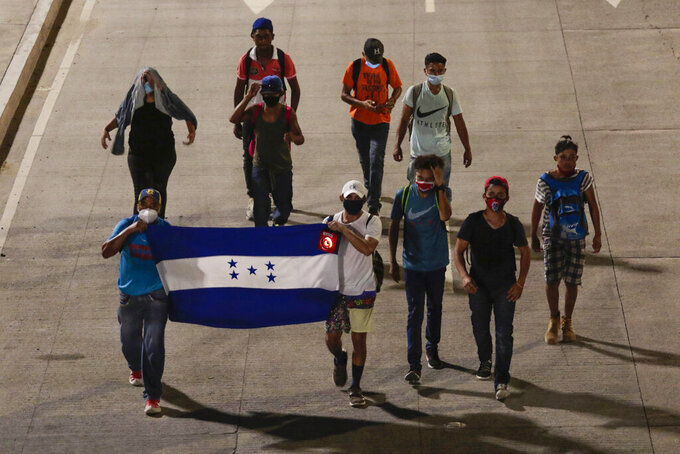 Migrants walk with a Honduran flag, along a highway in hopes of reaching the distant United States, as they depart San Pedro Sula, Honduras, Wednesday, Sept. 30, 2020. Hundreds of migrants have begun walking from this northern Honduras city toward the Guatemala border testing a well-trod migration route now in times of the new coronavirus. (AP Photo/Delmer Martinez)

CORINTO, Honduras (AP) — About 2,000 Honduran migrants hoping to reach the United States entered Guatemala on foot Thursday morning, testing the newly reopened frontier that had been shut by the coronavirus pandemic.

Authorities had planned to register the migrants as they crossed and offer assistance to those willing to turn back, but the group crossed the official border at Corinto without registering, according to Guatemala immigration authorities. Outnumbered officials made no attempt to stop them.

Before the crossing happened, Edwin Omar Molino, a 17-year-old from Cortes, said he wanted to leave Honduras because he couldn’t find work. He blamed President Juan Orlando Hernández for running the country into the ground.

“Even when you want to find a job, there aren’t any. That’s why we leave our country,” Molino said.

“There’s the pandemic, and it scares me,” he added. But he said he wouldn’t be able to help his family get ahead without taking the risk.

Central American migrants began traveling in large groups in recent years, seeking safety in numbers and in some cases avoiding the cost of smugglers. Calls for a new migrant caravan to leave Oct. 1 had circulated for weeks on social media.

The odds of a large migrant caravan reaching the U.S. border, already low, have grown increasingly slim over the past year. Under pressure from the United States, Mexico deployed its National Guard and more immigration agents to break up attempted caravans last year. They dispersed large groups of migrants attempting to travel together in southern Mexico. Actually crossing into the U.S. legally is virtually impossible now with pandemic, and entering illegally is as difficult as ever.

The departure of the new group was reminiscent of a migrant caravan that formed two years ago shortly before U.S. midterm elections. It became a hot issue in the campaign, fueling anti-immigrant rhetoric. While the caravans draw attention, they really only account for a small fraction of the daily migration flow by small groups that pass unnoticed through Central America and Mexico.

The migrants who arrived at the Guatemala border on Thursday had set out walking the previous night from San Pedro Sula, jumping the gun on their own scheduled departure.

At the border, Guatemalan officials were asking the migrants to provide documents showing a negative COVID-19 test — even though last week they said they wouldn’t require a test for those spending less than 72 hours in the country. Dozens of Guatemalan police and soldiers were maintaining order.

But about 2,000 migrants hustled through without registering. In addition, AP journalists saw others crossing the border illegally near the formal crossing. There were no reports of violence.

In the past, authorities have set up roadblocks deeper in the country to winnow down larger groups. A regional agreement allows citizens of Honduras to transit through Guatemala.

Those who walked down dark streets Wednesday night away from San Pedro Sula’s bus station carried small knapsacks, and many wore masks. They appeared to be mostly young men, though there were the occasional small children being pushed in strollers.

Governments throughout the region made it known they were watching Wednesday. Mexico’s immigration agency said in a statement that it would enforce “safe, orderly and legal” migration and not do anything to promote the formation of a caravan. The U.S. Embassy in Honduras said on Twitter Wednesday that migration to the U.S. was more difficult than ever right now — and more dangerous because of the coronavirus.

But the factors driving migrants to leave Central America certainly haven’t eased during the pandemic. As economies have suffered, there are ever fewer jobs to be had, and the struggle for families to put food on the table has only worsened. Some migrants also cited the ever-present high rate of crime.

The U.N.’s International Labor Organization said Wednesday that at least 34 million jobs have been lost in Latin America due to the pandemic. The ILO lists Latin America and the Caribbean as the worst-hit region in the world in terms of lost working hours, with a drop of 20.9% in the first three quarters of the year.

The flow of migrants north from Central America had slowed dramatically during the pandemic as countries throughout the region closed their borders. Most migrant shelters along the principal routes closed their doors to new arrivals as they tried to keep the virus from spreading to vulnerable populations. Mexico and the United States deported hundreds of migrants back to their home countries to try to empty detention centers.

Guatemala has now opened all of its borders, including the one with Mexico. But the U.S.-Mexico border remains closed for nonessential travel, and the U.S. government effectively shut down the asylum system at its southern border during the pandemic.

Mexico tried to bus asylum seekers stuck at its northern border to other parts of the country and back to their home countries. Mexico has typically offered migrants the opportunity to seek asylum there, but many have their minds set on the United States. Migrants are also likely to find it more difficult to find work in Mexico now as the economy is expected to contract 10% this year due to the impact of the pandemic.