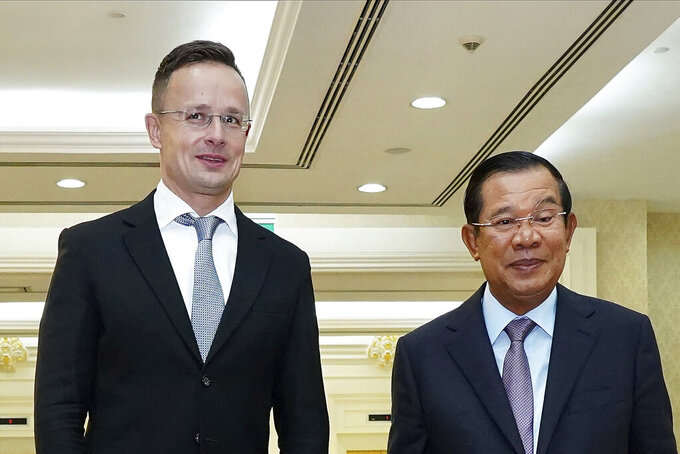 BANGKOK (AP) — Health authorities in Thailand said Tuesday that a Hungarian diplomat in Bangkok has tested positive for the coronavirus, and is believed to have become infected through contact with his country’s foreign minister, who tested positive last week during an abortive official visit.

Cambodian officials had said Monday that Hungary’s ambassador to Cambodia and Vietnam had tested positive for the coronavirus in the wake of a one-day visit to Cambodia by Hungarian Foreign Minister Peter Szijjarto. Szijjarto was found to be infected when he was tested last Tuesday on arrival in Thailand from Cambodia.

The unnamed 53-year-old Hungarian diplomat in Bangkok is the only locally transmitted case in Thailand so far to be linked to Szijjarto. He was described as asymptomatic but tested positive on Monday, and was sent to the Bamrasnaradura Infectious Diseases Institute in Bangkok's northern suburbs for treatment. Szijjarto had been sent to the same facility before flying back to Hungary.

Sopon Iamsirithaworn, director of the Division of Communicable Diseases of the Department of Disease Control, said the diplomat sat in the same car and had a quick dinner with Szijjarto on the day he arrived in Bangkok. After the foreign minister tested positive, the diplomat was quarantined at home, and transferred to the isolation facility after testing positive.

The diplomat was not identified by name. However, in response to reporters' questions, Sopon referred to him as “ambassador.” Hungary's embassy in Thailand did not reply to questions for further details.

In Cambodia, four people out of more then 900 tested for the virus because of links to Szijjarto’s visit have tested positive. In addition to the Hungarian ambassador, they are a Cambodian bodyguard for the visiting minister, a lawmaker from Cambodian Prime Minister Hun Sen’s ruling party and a senior Agriculture Ministry official.

Hun Sen and four Cabinet ministers went into quarantine because they met with Szijjarto the same day he tested positive. Hun Sen said he will stay quarantined for 14 days, and announced Monday on his Facebook page that he, his wife and other members of their household have all tested negative twice.

Szijjarto's case also prompted Cambodian authorities to increase measures against the spread of the virus, closing schools in the area of Phnom Penh, the capital, for two weeks and ordering karaoke parlors, beer gardens, museums, cinemas and other entertainment venues nationwide to be shut until further notice.

Thailand’s Department of Disease Control on Tuesday announced three new confirmed cases of the coronavirus in addition to the Hungarian diplomat. One traveled from the United States, one from India and one from Sweden. Thailand has seen only a handful of locally transmitted cases for several months.

Thailand has had 3,844 confirmed cases overall, including 60 deaths.