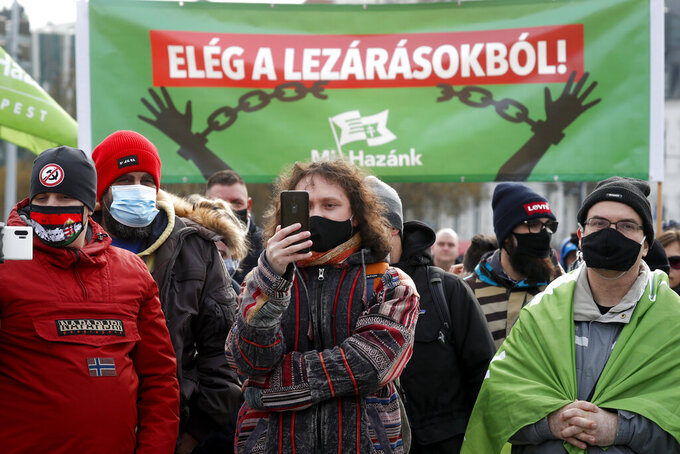 Hospitality sector workers, backdropped by a banner reading 'Stop the Restrictions" attend a protest, in Budapest, Hungary, Sunday, Jan. 31, 2021. Protesters gathered at a central square in Hungary's capital of Budapest on Sunday demanding a rethinking of the country's lockdown restrictions. As the lockdown limiting restaurants to take-away service approaches the three-month mark, many business owners complain that they have received little to none of the government’s promised financial assistance while other businesses like shopping malls and retail stores have been permitted to remain open. (AP Photo/Laszlo Balogh)

Organizers of the demonstration on a central square in Budapest called for restaurateurs to break pandemic rules by opening their businesses to customers Monday, in defiance of strict pandemic measures limiting restaurants and cafes to takeout service.

“Every tool that we have used until now has been depleted, so beginning now, every business should open in the spirit of civil disobedience," protest organizer Aron Ecsenyi said.

The demonstration came amid increasing calls for government action from Hungary's hospitality sector as the country's lockdown, which began on Nov. 11, approaches the three-month mark. Hungary's government has insisted that only mass vaccination of the population can bring an end to to the lockdown.

Pandemic restrictions were extended on Thursday until March 1, and many business owners complain that they have received little to none of the government's promised financial assistance while other businesses like shopping malls and retail stores have been permitted to remain open.

Some business owners have resorted to opening in secret to avoid closing for good. Krisztian Baliko, who owns a restaurant in the city of Szekesfehervar, 40 miles (65 kilometers) southwest of Budapest, had planned to open his business to in-person service on Monday, along with nearly 200 other businesses across Hungary that also planned to open unlawfully, according to a tally kept by demonstration organizers.

But Baliko's plans changed after the government on Saturday stiffened penalties for breaking pandemic restrictions: police may now require offending businesses to close their doors for six months to a year, and can issue hefty fines of between $4,000 and $17,000.

“People would go against the government's decision, but the retaliation that they are threatening — months-long closures, larger fines — is something people can't pay if there's no way to earn money,” Baliko said at the demonstration.

Health experts and politicians have also begun pushing for a rethinking of pandemic restrictions as the economic impact on the sector deepens. In 2020, Hungary's hospitality sector shrunk by $1.4 billion, and scarcely more than a quarter of the $68 million set aside by the government for wage assistance to restaurateurs has been delivered to date.

Tamas Soproni, mayor of a downtown Budapest district and member of opposition party Momentum, has advocated for increased financial support to hospitality companies, and for allowing outdoor terraces to open at restaurants, cafes and bars. He argues that the consequences of the lockdown go beyond economic hardship.

Health expert Dr. Zsombor Kunetz also argues for the gradual lifting of certain restrictions, proposing that outdoor terraces be opened to guests along with sufficient social distancing and the opening of indoor dining rooms with capacity restrictions and required use of higher-quality FFP2 masks.

He recommended that the government take steps to manage the growing discontent before it gets out of control.

“From the point of view of epidemic management, it is very dangerous if people take the lead and start opening illegal pubs and illegal restaurants where customers might show up,” he said. “Then this pandemic could explode very quickly.”

Demonstration organizer Szilard Ecsenyi said Polish and Italian hospitality entrepreneurs have embarked on similar campaigns to open their businesses and pressure governments there to negotiate on pandemic restrictions.

“We're fighting for a compromise," he said. “There is a need for mass resistance and civil disobedience, and I believe those who are struggling right now will hear our voice and will join us.”