Hungary's Orban strikes back at EU criticism on extra powers 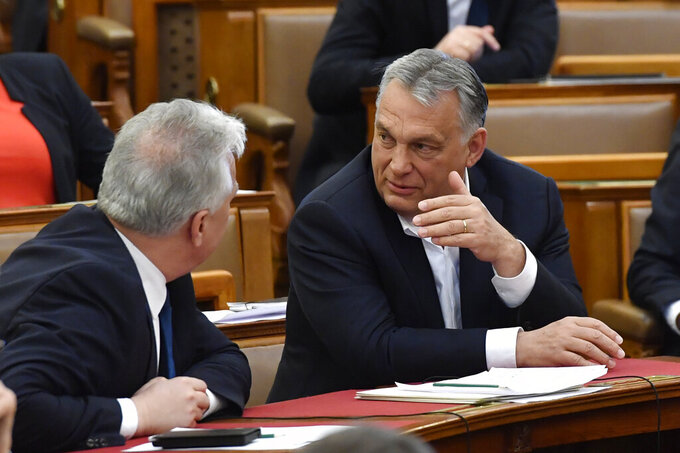 Hungarian Prime Minister Viktor Orban, right, chats with his deputy Zsolt Semjen during a plenary session of the Parliament in Budapest, Hungary, Budapest, Hungary, Monday, March 30, 2020. Hungary's parliament on Monday approved a bill giving Prime Minister Viktor Orban's government extraordinary powers during the coronavirus pandemic, without setting an end date for their expiration. The bill was approved by Orban's Fidesz party and other government supporters by 137 votes in favor to 53 against. (Zoltan Mathe/MTI via AP)

BUDAPEST, Hungary (AP) — Hungary’s prime minister struck back at his critics in the European Union, saying he has “no time” for dealing with some of them during the coronavirus pandemic and accusing others of wanting to “loot” the country.

A law approved this week by the Hungarian parliament gave Prime Minister Viktor Orban's government the power to rule by decree for as long as a state of emergency declared over the virus remains in place. The legislation drew wide condemnation, including from the EU, the U.N. and rights groups.

Part of the backlash came from the leaders of parties that are part of the EU parliament's largest political grouping. They called for expelling Orban's Fidesz from the European People's Party.

“The recent developments have confirmed our conviction that Fidesz, with its current policies, cannot enjoy full membership," read a letter to EPP President Donald Tusk signed by conservative party leaders, among them the prime ministers of Greece and Norway.

Orban, for his part, said he was preoccupied with more urgent matters.

“With all due respect, I have no time for this!" Orban wrote to EPP Secretary General Antonio López-Istúriz White. “I am ready to discuss any issue once this pandemic is over.

"Until then, I am devoting all my time exclusively to trying to save the lives of the Hungarian people and preparing measures for the social and economic recovery of the country, within the scope of our Constitution."

The EPP suspended Fidesz from its ranks last year because of concerns about the rule of law in Hungary under the Orban government, which is also facing EU proceedings for the same reason.

The head of the EU's executive arm, European Commission President Ursula von der Leyen, highlighted Hungary's new law while expressing concern Thursday that the approaches some governments are taking to the virus pandemic go too far in curbing personal liberties.

“Emergency measures in the corona crisis may be necessary … and many states are putting them in place right now,” von der Leyen said, adding that national policies should be “limited to what is necessary. They have to be strictly proportionate.”

“They should not last indefinitely and, very important, they should be subject to regular scrutiny,” she said.

For his part, Orban returned to a frequent scapegoat. Speaking on Hungarian state radio Friday, he blamed the criticism from Brussels on a “network” headed by billionaire Hungarian-American philanthropist George Soros that wants to “loot” Hungary and obtain its resources.

“Our opponents, who in this situation I can easily call our enemies, are operating with factually false statements,” Orban said, adding that his new powers were "roughly the same as the authority the French president has in peacetime. It is absolutely clear that this is a political attack.”

Hungary reported a total of 623 confirmed virus cases and 26 deaths as of Friday.