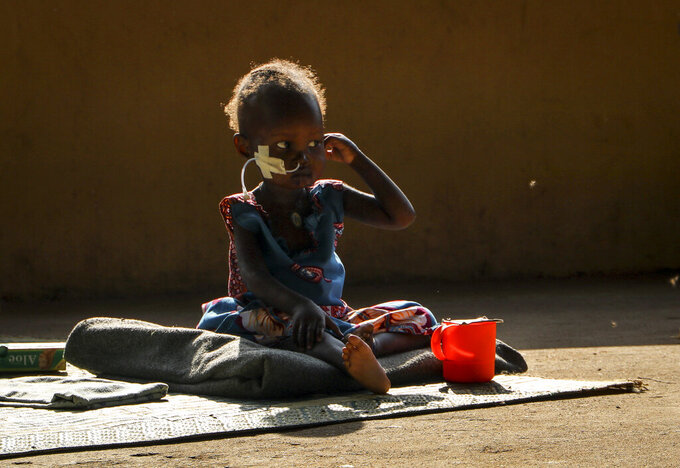 FILE - In this Thursday, Dec. 3, 2020 file photo, two year old Akon Morro, who is anemic and suffers from edema due to malnutrition, sits on the floor of a feeding center in Al Sabah Children's Hospital in the capital Juba, South Sudan. Economic fallout from the coronavirus pandemic has set back two decades of progress against the most severe forms of malnutrition and is likely to kill 168,000 children before a global recovery. That's according to a global study from a coalition of international organizations. (AP Photo/Sam Mednick, File)

PARIS (AP) — Economic fallout from the coronavirus pandemic has set back decades of progress against the most severe forms of malnutrition and is likely to kill 168,000 children before any global recovery takes hold, according to a study released Monday by 30 international organizations.

The study from the Standing Together for Nutrition Consortium draws on economic and nutrition data gathered this year as well as targeted phone surveys. Saskia Osendarp, who led the research, estimates an additional 11.9 million children — most in South Asia and sub-Saharan Africa — will suffer from stunting and wasting, the most severe forms of malnutrition.

Women who are pregnant now “will deliver children who are already malnourished at birth, and these children are disadvantaged from the very start,” said Osendarp, executive director of the Micronutrient Forum. “An entire generation is at stake.”

The fight against malnutrition had been an unheralded global success until the coronavirus pandemic struck.

“It may seem like it’s a problem that is always with us but the numbers were going down prior to COVID,” said Lawrence Haddad, executive director of the Global Alliance for Improved Nutrition. “Ten years of progress eliminated in 9 to 10 months.”

Before the pandemic, the number of stunted children declined globally each year, from 199.5 million in 2000 to 144 million in 2019. The number of children suffering from wasting stood at 54 million in 2010 and had dropped to 47 million last year. It's expected to rise again to 2010 levels, according to the study.

The research was released at the start of a year-long effort to raise money against malnutrition. Around $3 billion was announced, though some of that includes prior commitments. Pakistan, which has some of the world's most widespread malnutrition, pledged to spend $2.2 billion by 2025.

The consortium includes the World Bank, World Food Program, UNICEF and USAID as well as private health foundations and universities. UNICEF pledged to spend $700 million on nutrition programs annually over the next five years, $224 million more than it has spent over the past five years.

Haddad said the next step is holding governments accountable for their promises, especially those whose citizens suffer the most from malnutrition.

“A lot of hunger is about governance,” he said. He added that the pandemic makes the benefits of nutrition clear, because malnutrition leaves the body vulnerable to all kinds of disease, including coronavirus. “Nutrition is everyone’s best bet until the vaccine arrives.”