Hunt still on for suspects in ransacking of Chicago stores 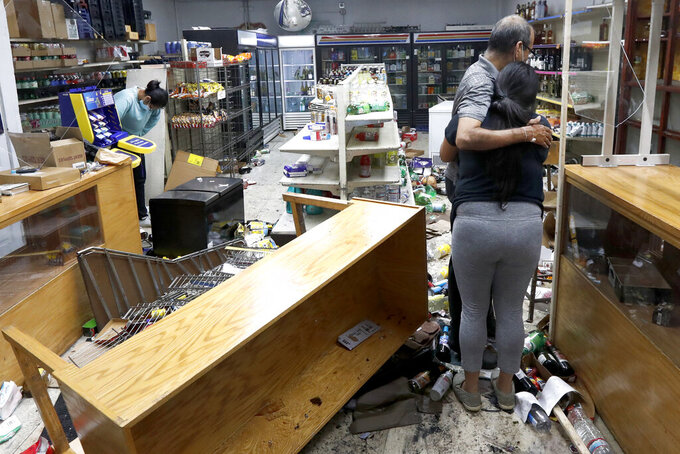 FILE - In this Monday, Aug. 10, 2020, file photo,Yogi Dalal hugs his daughter Jigisha after she arrived at the family food and liquor store and as his other daughter Kajal, left, bows her head after the family business was vandalized in downtown Chicago. A Chicago police task force that was formed after crowds swarmed into downtown and smashed their way into hundreds of stores in August is still investigating and making arrests four months later. (AP Photo/Charles Rex Arbogast, File)

CHICAGO (AP) — The summer night when crowds descended on downtown Chicago, shattered store windows and poured inside the gaping holes to grab as much merchandise as they could carry away is a distant memory to many in the city.

Even as the coronavirus crisis, the presidential election and the city's gun violence epidemic pushed other news aside, detectives and prosecutors kept at one of the biggest investigations in Chicago history to find and arrest those who from late Aug. 9 into the early hours of Aug. 10 turned block after block into the largest crime scene the nation's third-largest city has ever seen.

Four months later, detectives on a special task force are still poring over thousands of hours of surveillance videos and running down the more than 1,100 tips they've received. They keep adding to the nearly 100 video clips they've posted online in the hopes someone might identify suspects. And they monitor online sales sites to see if someone suddenly has some Gucci bags or electronics for sale.

It all has added up to the arrests of more than 100 people — one as recently as Wednesday— on various felony charges, including burglary, looting, theft, gun charges, selling stolen property online, and the seizure of 26 vehicles.

“The message (to suspects) is the task force isn’t quitting ... and you will eventually be found and arrested,” Deputy Chief Brendan Deenihan said.

The crimes took place largely in and around downtown, including along the famed Magnificent Mile shopping district, and began after a false rumor that police had fatally shot a teenager on the South Side and followed earlier protests and unrest stemming from the death of George Floyd in Minnesota.

The daunting job of investigating the August crimes started with the collection of more than 230 surveillance videos from stores that were hit and scores more from the city's massive surveillance camera network — about 2,000 hours worth of video.

Making the job harder was that many people's faces were covered with the same masks used to stop the spread of the COVID-19 virus.

That left detectives searching for something else to help identify suspects. In one case, they matched a tattoo on the arm of a man who used a hammer to smash at least seven store windows to a tattoo from a jail booking mug shot.

They also employed the same strategy — on a much larger scale — used in the investigation that led to charges against actor Jussie Smollett accusing him of staging a 2019 attack on himself. Just as detectives stitched together videos to follow two men who allegedly participated in the attack on Smollett, Looting Task Force detectives followed suspects as they moved from store to store.

The investigation has been made more difficult because many of the suspects don't have criminal histories and therefore police do not have mug shots of them.

For many people, it seems to have been a crime of opportunity, said Cook County State's Attorney Kim Foxx, whose office is prosecuting the cases.

“They saw what was happening and were counting on the numbers (of people) to be able to get away with it,” she said.

Julisa Foster, a 25-year-old woman who is awaiting trial on felony burglary and looting charges, was grabbed by police at a store.

For many other arrests, police have needed help from the public. In Chicago, where suspicions about a police force with a history of racism and brutality have left many residents unwilling to help detectives solve anything but the most heinous crimes, that's no small task. But police actually have found many people willing to help.

“The tips were more prevalent than you would think,” Sgt. Alex Wolinski said.

Foxx said many residents were scared and angry. Stores around the city — fearful that they might be targeted — closed their doors, leaving people unable to get food or medication. And many quickly concluded that the crimes had nothing to do with Floyd, a Black man who died after a white Minneapolis police officer pressed his knee into Floyd’s neck for several minutes.

“People were saying, `What does George Floyd have to do with breaking into Macy’s?” Foxx said.

The Rev. Michael Pfleger, a Roman Catholic priest and prominent activist on the city’s South Side, believes some of the crimes stemmed from anger. But he said, "It inconvenienced so many people because their stores closed down and people were like, ‘Oh my God, where do I get my prescriptions now?’ (and) they were outraged about that.”