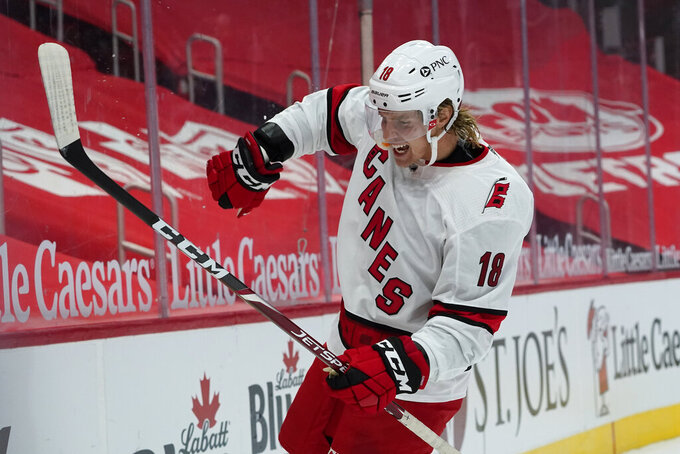 DETROIT (AP) — Nino Niederreiter scored early in the first period and Petr Mrazek had to make just 14 saves for a shutout, helping the Carolina Hurricanes beat the Detroit Red Wings 3-0 Thursday night in the season opener for both teams.

“It felt great being back on the ice," Niederreiter said. “It’s been quite some time without a game.”

Ryan Ddzingel scored on a power play with 2:34 left and Andrei Svechnikov added an empty-net goal.

Detroit goalie Thomas Greiss made only one save before he gave up a goal, but stopped 40 shots to give his offensively challenged team a chance for two-plus periods.

The Red Wings, who were easily the NHL's worst team last season, played for the first time since they lost to Carolina at home on March 10, 2020.

“Once you started playing, you stopped thinking about it as much and it wasn’t quite as weird,” Red Wings center Dylan Larkin said.

Carolina's layoff was less than half as long because it played until late in the summer, sweeping the New York Rangers in the playoffs after the pause before being eliminated by Boston in five games.

“Game 1 after a long layoff, I’m not too upset about it," Carolina coach Rod Brind’Amour said. “The effort was really good.”

The Hurricanes were dominant in the opener, outshooting Detroit 43-14.

“Not a lot of action,” said Mrazek, who was drafted by Detroit in 2010 and spent six seasons with the franchise. “But they were in our zone for a while and our D did a great job, blocking a lot of shots."

Thanks to Greiss, Carolina didn't lead by more than a goal until Ddzingel converted late in the third period. Svechnikov's empty-netter came about a minute later.

“I thought we played hard and kept it close,” Greiss said. “It was a good step in the right direction.”

Larkin made his debut as captain of the Red Wings, and his giveaway helped the Hurricanes score first.

Larkin's backhand pass in his own end was picked off by Sebastian Aho, whose pass from the right circle to the left circle set up Niederreiter with open space to score on Greiss 3:38 into the game.

“I made a poor mistake with the puck that led to the first goal,” Larkin said. “Then, they got extended power play time in the third and got the second goal. If you take away those mistakes, it’s a very close game against a great team.”

Hurricanes defenseman Dougie Hamilton and Detroit forward Sam Gagner dropped gloves and threw punches much to the delight of players on both teams. Their teammates hit their sticks on the boards and the ice when the brief brawl ended.

“I don’t like seeing that, but it’s nice to see him stand up for our group," Brind’Amour said.

The Hurricanes are shooting to make the playoffs in three straight years for the first time since relocating to North Carolina in 1997 from Hartford, Connecticut. Playing the rebuilding Red Wings eight times in 56 games in the pandemic-altered Central Division should help Carolina's chances.

The Red Wings piped in crowd noise and put red tarps over most of the seats in Little Caesars Arena's lower bowl, leaving some uncovered to allow up to 250 family members and friends of players, coaches and team employees to attend the game.

“It sounded a lot better than it did in the bubble," Niederreiter said. “Even with no fans, you could feel a little bit of an atmosphere.”

Detroit hosts Carolina on Saturday night and both teams will likely use different goaltenders, hoping to manage their workload during a condensed season. The Red Wings' No. 2 goalie is Jonathan Bernier. The Hurricanes have two other options in net: James Reimer and Anton Forsberg.