Huskers looked at backing out of game at Oklahoma 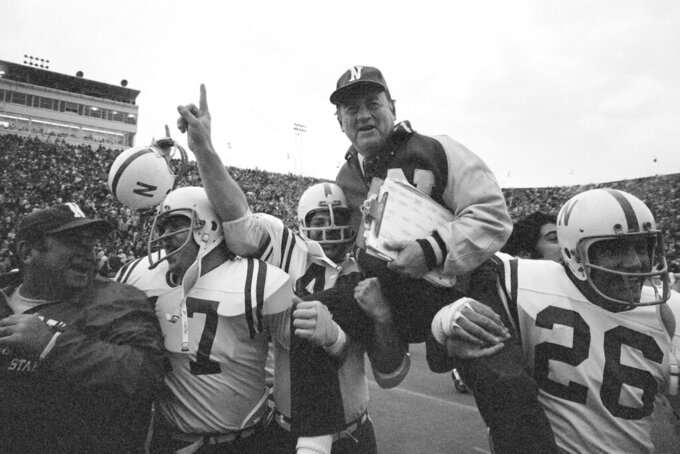 FILE - In this Nov. 25, 1971, file photo, Nebraska head coach Bob Devaney is carried off the field by his victorious players after Nebraska defeated Oklahoma 35-31 in an NCAA college football game in Norman, Okla. Reports that Nebraska wants to back out of playing at Oklahoma this season didn't sit well with one of the stars of the 1971 Game of the Century. The game scheduled Sept. 18 in Norman, Oklahoma, would mark the 50th anniversary of Nebraska's 35-31 win over the Sooners in a clash of the Nos. 1 and 2 teams in the nation. (AP Photo/File)

The Nebraska athletic department acknowledged Friday that it explored the possibility of backing out of this fall's game at Oklahoma before ultimately deciding to go ahead with it.

According to unidentified sources who spoke to Stadium, the Huskers contacted teams in the Mid-American Conference and Old Dominion about playing in Lincoln, Nebraska, on Sept. 18. The Lincoln Journal Star also reported Nebraska officials explored the feasibility of not playing the Sooners.

The news created a firestorm among Cornhuskers fans, many of whom railed on social media about the Huskers being afraid to play the game against their old rival. Johnny Rodgers, the 1972 Heisman Trophy winner who starred in the '71 game, said, “We can’t really afford to have a reputation like that, trying to get out of playing top teams."

Nebraska athletic director Bill Moos said in a statement that the Huskers look forward to playing the Sooners.

“Due to the economic devastation caused by the COVID-19 pandemic to Husker Athletics and the local community, our administration did explore the possibility of adding an eighth home game this fall,” Moos said. "That option would have helped us mitigate cost-cutting measures and provide a much-needed boost to our local economy. Ultimately, the decision was made to move forward with our game at Oklahoma in 2021. We have the utmost respect for the University of Oklahoma, and this storied rivalry, and I know our fans have been excited about this series for a long time. Go Big Red!”

It would have cost Nebraska $1 million to break the contract, which was signed in 2012. The teams also are scheduled to meet in Lincoln in 2022.

“The Oklahoma-Nebraska football series represents one of the most unique traditional rivalries in college football,” Castiglione said. “The planning for this game was intentional as we mark the 50th anniversary of the Game of the Century. We’ve been looking forward to celebrating these two storied programs and have collaborated on various aspects of what promises to be a special weekend.”

The Huskers and Sooners played 71 straight seasons as members of the Big Six and Big Eight. The game decided the Big Eight championship 31 times in 36 seasons. The teams moved to the Big 12 in 1996 and met twice every four years. Nebraska went to the Big Ten in 2011.

No game was bigger than the one in ‘71. The Huskers won in Norman and went on to a second straight national title. It was the Sooners' only loss, and they were No. 2 in the final polls.

Rodgers is one of the most identifiable figures from the game, returning a punt 72 yards for a touchdown for the signature play of his career.

Rodgers said he has been invited to participate in events surrounding the game and that he had gotten calls Friday from former teammates who were disgruntled about the possibility of ducking a big game. Rodgers called that notion “unheard of.”

“We can’t be trying to get out of being competitive, because that’s our whole nature,” Rodgers said. "Our whole state bleeds Big Red football. We want to be known for playing the best and beating the best.”

Oklahoma has won six straight Big 12 championships and appeared in four of the last six College Football Playoff semifinals. Nebraska has had losing seasons four straight years and in five of the last six. It is 12-20 in three seasons under Scott Frost.

“If we're going to start getting our reputation back, we've got to start beating and playing the best,” Rodgers said. That's just the only way. What are we going to play? Division II schools or something? We play Ohio State. We should definitely be wanting to play Oklahoma.”