'I feel hope': Nurse among 1st to get vaccine in Washington 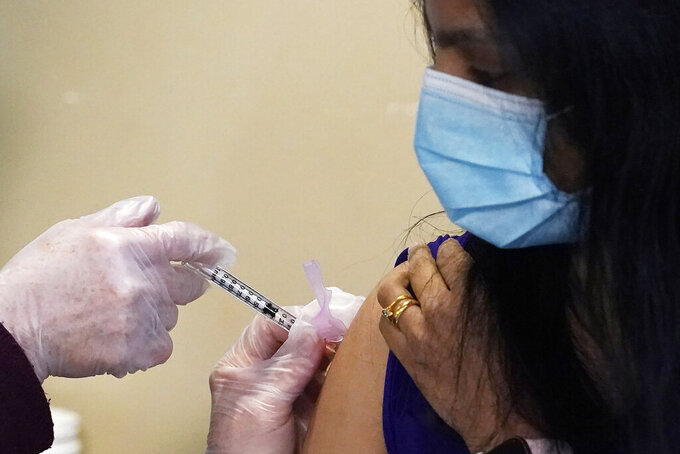 SEATTLE (AP) — With a quick, painless shot in the arm, health care workers in Washington began receiving the COVID-19 vaccine Tuesday, marking a turning point 10 months after the state confronted the first U.S. outbreak of the virus.

“For the first time in a while, I feel hope,” Harborview Medical Center COVID-19 intensive care nurse Amy Fry said after becoming the first worker there to be vaccinated. “It's been a long, exhausting road.”

Frontline health-care workers and residents of long-term care facilities are being prioritized as part of an effort to quickly inoculate those most at risk during the pandemic. It will be months before the vaccine is available to much of the broader population.

There are about 500,000 people in Washington eligible for the vaccine in the initial phase, authorities say. The state’s population is approximately 7.5 million. The Department of Health said it expects to get 62,400 doses of the Pfizer vaccine this week, which will be distributed to 17 sites in 13 counties.

UW Medicine was administering the first shots in the two-shot regimen to about a dozen people Tuesday, including a Seattle Fire Department paramedic, nurses and an environmental services technician — those who clean the hospital and handle biological waste.

Five workers in the Swedish hospital system were receiving shots Tuesday, with the system to hold further clinics for its patient-facing workers each day through Saturday.

“Everyone is very eager to get this,” said Swedish spokeswoman Tiffany Moss. “It's been a long year. This is that glimmer of hope for everyone.”

By the end of December, the state expects to get another 222,000 doses of the Pfizer vaccine. And, if a vaccine developed by Moderna gets authorized by the FDA as expected this week, the state says it should get about 183,800 doses of that offering by the end of the month.

The first confirmed case of COVID-19 in the United States was in Washington in January. The state also saw the nation’s first deadly outbreak at a nursing home. Since the start of the pandemic there have been about 200,000 confirmed coronavirus cases in Washington and more than 2,800 deaths.

This story has been corrected to show that nurse Amy Fry works at Harborview Medical Center, not University of Washington Medical Center.