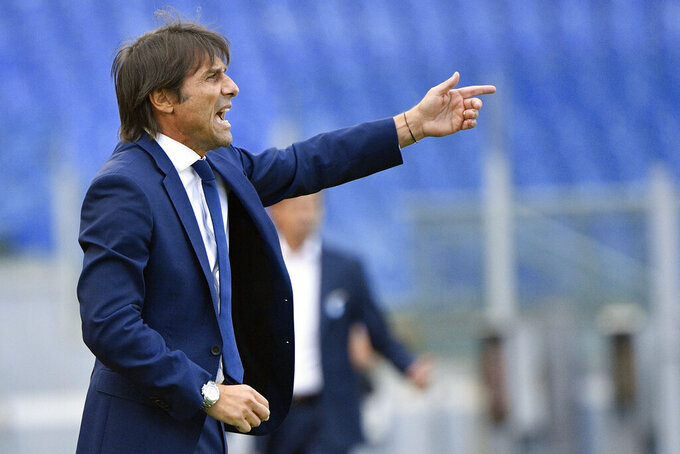 MILAN (AP) — There will be no smoke billowing across the stadium from ultras’ flares, no fans taunting each other with chants and flags, no roars as the teams walk out.

It will still be the Milan derby, though.

A strange atmosphere at San Siro awaits on Saturday when Inter Milan hosts city rival AC Milan with only 1,000 fans allowed in the 80,000-seat stadium because of the coronavirus pandemic. There were even some doubts last week about whether the derby would go ahead because of rising COVID-19 cases in both squads.

One player who is almost certain to be on the field is Milan forward Zlatan Ibrahimović, who returned to training this week after recovering from the virus.

Former Inter and Milan forward Christian Vieri believes Ibrahimović will be stronger than ever.

“He will have broken the treadmill every day,” Vieri said in an interview with Gazzetta dello Sport. “Someone who says that COVID had a bad idea to challenge him, is mentally stronger than everyone.

“He’ll play the derby with a cigarette in his mouth, trust me.”

Milan finished sixth but the 39-year-old Ibrahimović joked that if he had been there from the start of the season the Rossoneri would have won the league. He has three goals in the two matches he's played this season.

“Milan is a young team, but it has a number one, the veteran Ibra,” Vieri said.

“He’ll score more than 20 goals. Ibrahimović gives you experience which has no equal and encompasses everything: Technique, vision of the game, scoring goals, making goals, and making his team play better, because he raises the level of quality of everyone.”

Before the season, Antonio Conte’s Inter side was expected to mount a serious title challenge, while for Milan just qualifying for the Champions League would be an achievement. For now, the roles are reversed.

Milan goes into the derby on a 19-match unbeaten run in all competitions and having won all three of its league matches without conceding a goal.

Inter drew its last match, against Lazio, and has already let in six goals.

“We worked so hard during lockdown, it’s not by chance that we’ve never lost,” Milan defender Theo Hernández said. “But the road is long.”

Milan has not won a Serie A derby match since 2016, while Inter has won five of their last six meetings in the league.

“Compared to a year ago, we feel a lot stronger ... we are stronger, everything has changed,” Hernández said. “We are calm, even though we know well that it is not just any match. It’s the derby.

“But we have to play as we have done until now: Running, fighting, and doing our utmost to win it. Now we are a different Milan, we can do it.”