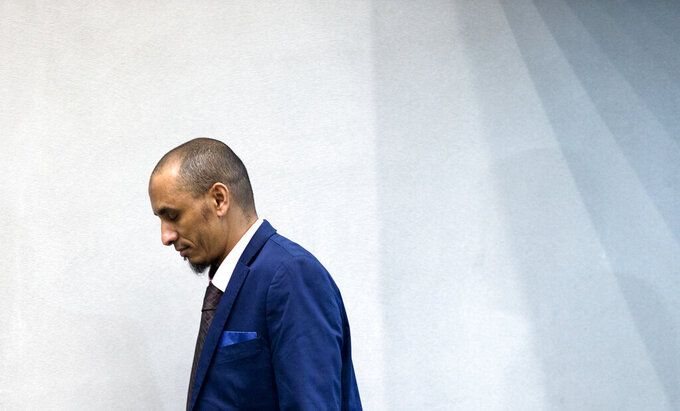 FILE - In this Wednesday April 4, 2018, file image, alleged jihadist leader Al Hassan Ag Abdoul Aziz Ag Mohamed Ag Mahmoud takes his seat in the court room for his initial appearance on charges of war crimes and crimes against humanity at the International Criminal Court in The Hague, Netherlands. The trial opened Tuesday, July 14, 2020 of an alleged Islamic extremist charged with policing a brutal Islamic regime in the Malian city of Timbukti after al-Qaida linked rebels overran the historic desert city in 2012. Al Hassan Ag Abdoul Aziz Ag Mohamed Ag Mahmoud, who sat in court wearing a face mask and white headscarf, is charged with involvement in crimes including rape, torture, enforced marriages and sexual slavery from April 2012 until the end of January 2013. (AP Photo/Peter Dejong, Pool, File)

THE HAGUE, Netherlands (AP) — An alleged Islamic extremist who went on trial Tuesday on charges that he policed a brutal Islamic regime in Timbuktu after al-Qaida-linked rebels overran the historic Malian desert city in 2012 was a “key figure” in the reign of terror, the International Criminal Court's chief prosecutor said.

In an opening statement, Prosecutor Fatou Bensouda said the extremists who occupied Timbuktu turned life the city known as the “pearl of the desert” into a nightmare, where armed rebels destroyed historic mausoleums and meted out public floggings, amputations, forced marriages and rapes.

The defendant, Al Hassan Ag Abdoul Aziz Ag Mohamed Ag Mahmoud was “well aware of and indeed involved, as evidence will show, in this cruel and brutal repression,” Bensouda told judges at the court in The Hague.

As the hearing began, one of Al Hassan's lawyers, Nicoletta Montefusco, argued that he was unfit to stand trial due to post-traumatic stress disorder and “dissociative features that result from severe maltreatment.” Defense lawyers previously told the court that Al Hassan was tortured while in custody in Mali before he was sent to The Hague.

They asked to suspend the proceedings on the eve of the trial because COVID-19 restrictions had prevented them from meeting their client and seeing his mental condition for four months, the defense lawyers said.

Judges declined to halt the trial and called for a medical assessment of Al Hassan, who later said he understood the 13 counts of war crimes and crimes against humanity with which he's charged but declined to enter pleas.

Al Hassan, who sat in court wearing a face mask and white headscarf, is charged with involvement in crimes including rape, torture, persecution, enforced marriages and sexual slavery committed from April 2012 until the end of January 2013.

He allegedly was a key member of Ansar Dine, an Islamic extremist group with links to al-Qaida that held power in northern Mali at the time.

“Many were forced into marriage,” Bensouda said. “Confined against their will and repeatedly raped by members of the armed group.” Al Hassan was involved in organizing such marriages, the prosecutor told judges.

She cited one rape victim as saying, “All that was left of me was a corpse.”

A French-led military operation in 2013 forced Al Hassan and others from power, though rebel elements have continued to stage numerous attacks on Malian and international forces.

The trial opened against a backdrop of political tensions in Mali following a contested legislative electios. On Sunday, protesters ransacked a building belonging to President Ibrahim Boubacar Keita’s political party.

The trial is the second case at the ICC linked to Ansar Dine's brutal occupation of Timbuktu. A member of the group, Ahmad Al Faqi Al Mahdi, was convicted in 2016 and sentenced to nine years’ imprisonment for attacking nine mausoleums and a mosque door in the city in 2012.

At previous hearings, Al Mahdi pleaded guilty and expressed remorse for his role in leading the destruction.