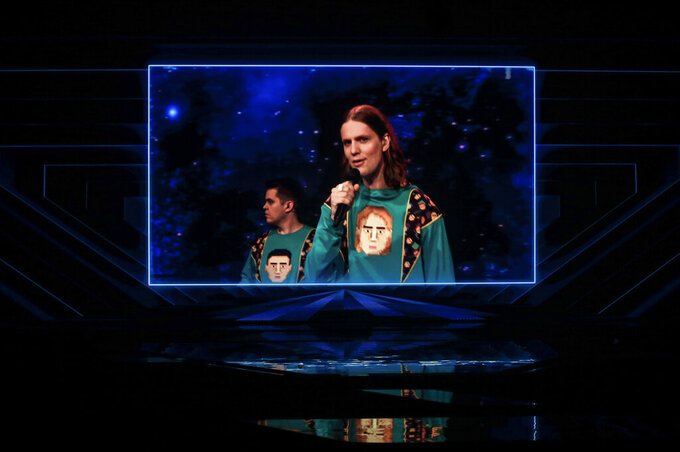 Dadi og Gagnamagnid from Iceland perform via video link during rehearsals at the Eurovision Song Contest at Ahoy arena in Rotterdam, Netherlands, Wednesday, May 19, 2021. A member of Dadi og Gagnamagnid tested positive for COVID-19 and the band made the decision to withdraw from performing in this year's live Eurovision Song Contest shows, as they only want to perform together as a group. (AP Photo/Peter Dejong) 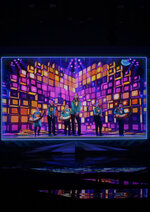 “Dadi og Gagnamagnid have taken the difficult decision to withdraw from performing in this year’s live Eurovision Song Contest shows, as they only want to perform together as a group,” organizers said.

Their song, “10 Years,” will remain in the competition. A recording of the group's dress rehearsal from last week will be broadcast in Thursday's second semi-final.

Lead singer Dadi Freyr said in a post on Instagram that members of the Icelandic delegation in the Dutch port city of Rotterdam for the contest “have all been extremely careful the whole trip, so this comes as a huge surprise.”

The 65th edition of the song contest is underway in Rotterdam amid strict testing and hygiene protocols in an attempt to prevent the spread of the virus. Up to 3,500 fans are allowed to attend dress rehearsals, the semi-finals and Saturday’s final if they have tested negative for the virus.

Ten performers from each of Tuesday's and Thursday's semi-finals at the Ahoy Arena progress on to Saturday's grand final, where they will join the so-called big five of Italy, France, Germany, Spain and the United Kingdom, along with the host nation, the Netherlands.

On Tuesday night, voters chose singers or groups from Norway, Israel, Russia, Azerbaijan, Malta, Lithuania, Cyprus, Sweden, Belgium and Ukraine to go on to the final.