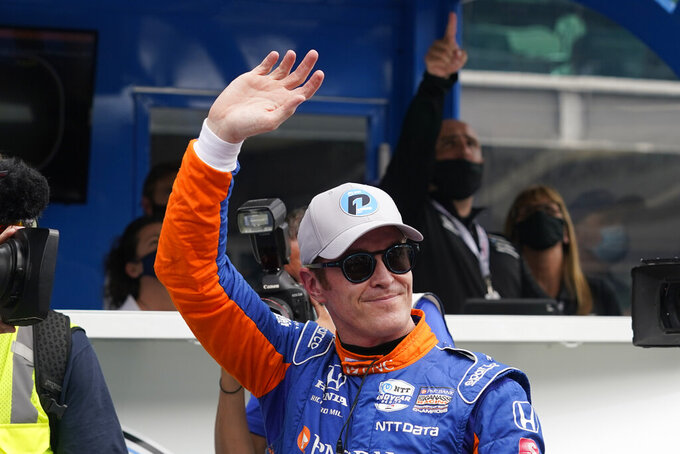 Scott Dixon, of New Zealand, waves to fans after winning the pole for the Indianapolis 500 auto race at Indianapolis Motor Speedway, Sunday, May 23, 2021, in Indianapolis. (AP Photo/Darron Cummings)

INDIANAPOLIS (AP) — Scott Dixon is sick — not like crazy fast sick and on the pole for the Indianapolis 500 for the fourth time in his career — but his ears are clogged and his sinuses are stuffed and he probably needs to see a doctor.

The pesky ailments he figured his young son brought home from daycare first hit him Friday when “I just started feeling like junk" and progressed through pole day “when I woke up and I just felt really bad” hours ahead of his scheduled run at Indianapolis Motor Speedway.

But Dixon is the greatest IndyCar driver of his generation and the four Chip Ganassi Racing cars were dialed in for qualifying. All four had a solid shot at the pole and some sort of head cold was hardly going to slow him down.

“You know, I think obviously the adrenaline kicks in and you feel fit at that time,” Dixon told The Associated Press on Monday. “It's annoying because my ears are blocked and for radio and equilibrium it was weird. But it turned out all good.”

Dixon told The AP on Monday the “ragged” schedule leading into the Indianapolis 500 has often made him susceptible to colds, and he's had a rough battle this year with seasonal allergies. He is fully vaccinated and said he previously contracted the coronavirus in December while in the United Kingdom.

Dixon said his bout with COVID-19 knocked him out for three days spent sleeping 14 or more hours. He said he also battled overall body soreness.

“This is night-and-day from COVID,” Dixon said.

He said his throat had flared on Monday, partly because of all the promotions Dixon did as the Indy 500 pole winner.

Dixon turned four laps around the speedway with an average speed of 231.685 mph — enough to snatch the pole away from Colton Herta by a mere 0.03 seconds or roughly six feet over the 10-mile qualifying run.

Herta, the 21-year-old rising American star, had just a few minutes to celebrate his name atop the pylon at famed Indianapolis Motor Speedway. He thought his four laps were pretty solid but knew Dixon, the six-time IndyCar champion and last driver to make his run, was going to be difficult to beat.

“I knew I was first. I didn’t know what Dixon was doing, I wasn’t really sure what was going on,” Herta said. “I could only tell by what the crowd was cheering that it was probably bad news for me.”

Even when he's feeling far from his best, “The Iceman” cannot be rattled.

His pole-winning run was his first since 2017 — a drought his wife, Emma, often ribbed him about — and that last one had its own unique story. After claiming the top spot for the Indy 500 that year, he celebrated with Dario Franchitti and a trip to the Taco Bell down the street from the speedway.

As the two drivers with a combined four Indy 500 wins and 10 IndyCar championships idled in the drive-thru lane awaiting their chalupas, they were robbed at gunpoint less than a mile away from where they'd been celebrating just hours earlier.

That Taco Bell has since been knocked down and replaced by a hamburger joint, so the party never left the motorhome lot at Indy on Sunday night. Franchitti made a trip to a pizza joint on Main Street in Speedway and returned with a trunk full of pies.

“They way over-ordered and when I got back to the bus this morning there were still boxes of pizza everywhere. Just a bunch of slobs,” Dixon complained.

But it's the least of his worries for the next few days. Cars aren't back on track until Friday and Dixon planned to spend Monday catching up on sleep and trying to shake his cold. This is a big week for the New Zealander, who with 51 career victories ranks third on IndyCar's all-time wins list.

One more win will tie him with Mario Andretti for second and put A.J. Foyt and his 67 career wins next on Dixon's to-do list. But rankings and milestones mean little right now to Dixon, who turns 41 in July and is by far the longest tenured driver in Ganassi history.

Ganassi hired Dixon four races into the 2002 season and the pair has shredded the record books together. All the wins and trophies are wonderful, but at this stage of his career, Dixon finds it's the near-misses that stick with him the longest.

He's only won the Indy 500 once, in 2008, and a driver of his stature should have more wins in “The Greatest Spectacle of Racing.” But he's finished second three times — twice to Franchitti, no less — and again last season when a late yellow flag ended any chance at passing winner Takuma Sato in the closing laps.

Dixon won't put added pressure on himself headed into Sunday's race. He wants the win, of course, but approaching Indy as anything but another day at the office can only disrupt the approach he's taken in each of his last 18 Indy 500s.

“I truly see it as just another race. I think if you treat it any differently then it becomes a bit weird,” Dixon said. “The problem with the 500 is there are so many emotions. It's just an emotional rollercoaster through the whole event. There are races that determine winners and races that determine champions. I think there's a big difference between winners and champions and this is a place where racers become champions.”