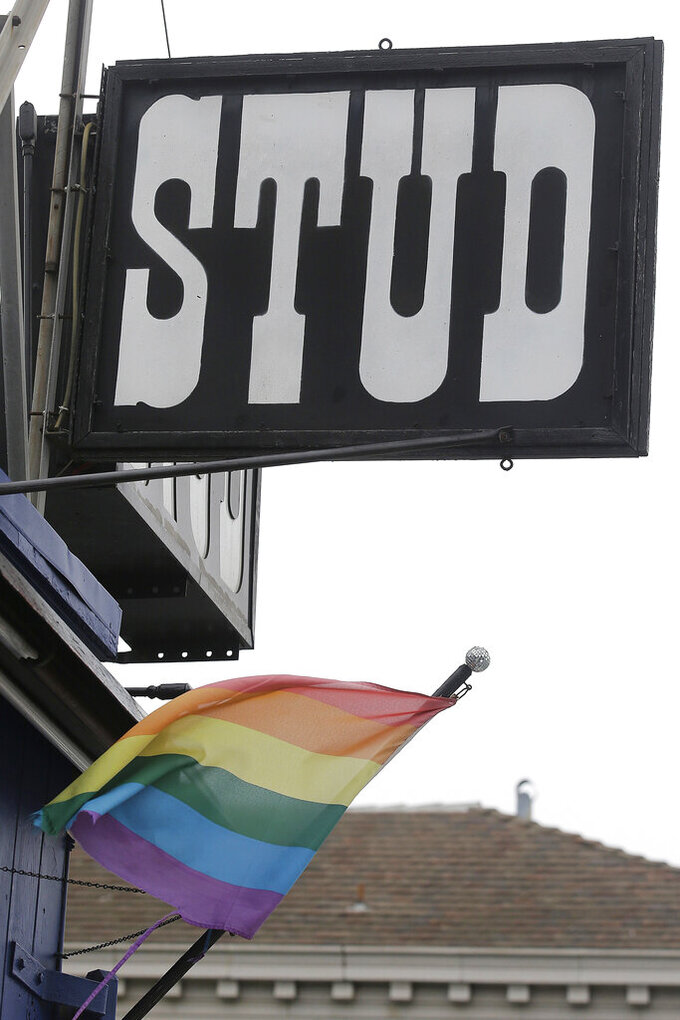 FILE - This July 6, 2016, file photo shows a rainbow flag flying under a sign for The Stud bar in San Francisco. The Stud, one of the nation's most celebrated gay bars, is being forced from its home amid the financial fallout of the coronavirus pandemic. (AP Photo/Jeff Chiu, File)

SAN FRANCISCO (AP) — One of the nation’s most celebrated gay bars is being forced from its home amid the financial fallout of the coronavirus pandemic.

The Stud is the longest continually running gay bar in San Francisco and known throughout the country as one of the bohemian, gender-bending, anything-goes institutions that made San Francisco into a gay mecca.

The 18-member collective that operates the club announced late Wednesday that they had decided to close the bar, though they will look for a new location.

“Because of a lack of revenue due to the COVID-19 pandemic, the historic bar will be announcing that they are permanently closing their location and will be holding a drag funeral to honor the end of an era of LGBT nightlife,” said one of the owners, Honey Mahogany, in a news release.

It's at least the second time the 54-year-old bar has faced the prospect of full closure. But previous situations were due to gentrification in San Francisco, now one of the nation's tech hubs.

A cooperative group of 18 owners then bought the bar to keep it running.

Wedged into a space in San Francisco's South of Market neighborhood — the epicenter of the city's tech world — The Stud opened in 1966 and quickly gained a reputation as a spot with a hippie vibe and eclectic customers. Its current space features gilt mirrors, a disco ball and a small performance stage.