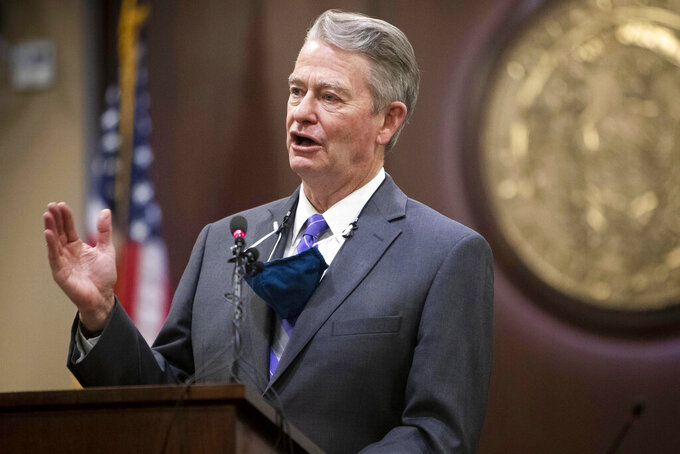 FILE - In this Oct. 1, 2020, file photo, Idaho Gov. Brad Little gestures during a press conference at the Statehouse in Boise, Idaho. Gov. Little has issued an executive order repealing a mask-mandate prohibition put in place while he was out of the state by the lieutenant governor, describing her actions as a tyrannical abuse of power and an "irresponsible, self-serving political stunt." The Republican governor on Friday, May 28, 2021, rescinded Republican Lt. Gov. Janice McGeachin's executive action taken Thursday. (Darin Oswald/Idaho Statesman via AP, File)

BOISE, Idaho (AP) — Idaho Gov. Brad Little on Friday issued an executive order repealing a 24-hour-old mask-mandate prohibition put in place while he was out of the state by the lieutenant governor, describing her actions as a tyrannical abuse of power and an “irresponsible, self-serving political stunt.”

The Republican governor up to now had been reserved in his comments about Republican Lt. Gov. Janice McGeachin, a member of the far-right who has worked to undermine Little's handling of the coronavirus pandemic.

Her executive order Thursday banning mask mandates in schools and public buildings is widely seen as part of that campaign. And she is already using her nullified executive order in fundraising efforts.

Little has never issued a statewide mask mandate, though he has worn a mask and encouraged others to do so to slow the spread of the virus.

Some Idaho counties, cities and schools have issued their own mask mandates but many have been lifted as more Idaho residents have been vaccinated. Two counties and 10 cities still have them in place, as do multiple schools.

About 590,000 of Idaho’s 1.8 million residents have been vaccinated. State officials have reported that the virus has killed more than 2,000 people in the state and sickened some 190,000.

“I have opposed a statewide mask mandate all along because I don’t think top-down mandates change behavior the way personal choice does,” Little said in a statement about his repeal of McGeachin's order.

Little added: “But, as your Governor, when it came to masks, I also didn’t undermine separately elected officials who, under Idaho law, are given authorities to take measures they believe will protect the health and safety of the people they serve.”

McGeachin in her order issued Thursday and that took effect shortly after at 11 a.m. didn't notify Little of her intentions, but the governor's office did notify McGeachin before Little's order to rescind hers went out.

McGeachin also didn't notify ahead of time schools or elected officials effected by her order, or discuss the order with them.

“Taking the earliest opportunity to act solitarily on a highly politicized, polarizing issue without conferring with local jurisdictions, legislators, and the sitting Governor is, simply put, an abuse of power,” Little said. “This kind of over-the-top executive action amounts to tyranny — something we all oppose. How ironic that the action comes from a person who has groused about tyranny, executive overreach, and balance of power for months.”

McGeachin fired back on Twitter with a statement shortly after Little issued his executive order nullifying hers, saying Little had rejected conservative solutions.

“I understand that protecting individual liberty means fighting against tyranny at ALL levels of government — federal, state, and local,” she wrote. “It is your God-given right to make your own health decisions, and no state, city, or school district ever has the authority to violate your unalienable rights.”

Little said McGeachin's order would have had alarming consequences if it had lasted.

He said there would have been no safety requirements for social workers visiting homes of at-risk individuals, at the state testing lab, or at prisons that could have been hit with coronavirus outbreaks. He also said McGeachin's executive order conflicts with existing laws.

“This is why you do your homework, Lt. Governor,” Little said in his statement.

Little has been criticized by the far-right of his party ever since the pandemic entered Idaho and he issued a temporary stay-at-home order in late March of 2020 as patients overwhelmed some hospitals and health care workers became sick.

Health care facilities feared running out of protective equipment as the illness spread. The lockdown allowed the situation to stabilize and the state to bring in masks and other equipment.

Lawmakers in the Legislature earlier this year tried but failed to pass a mask-mandate ban. One bill overwhelmingly passed the House of Representatives, but it died in the Senate when a powerful committee chairman declined to give it a hearing.

Little has stated his goal throughout the pandemic has been to balance the safety and health of Idaho residents with economic concerns. Idaho has rebounded economically much faster than other states, with an unemployment rate now of just over 3%, approaching pre-pandemic levels.

“I am always reluctant to engage in political ploys, especially when I have been steadfast in meeting the simultaneous goals of protecting both lives and livelihoods,” Little said. “I do not like petty politics. I do not like political stunts over the rule of law. However, the significant consequences of the Lt. Governor's flimsy executive order require me to clean up a mess.”

An Idaho attorney general's office opinion of McGeachin's order requested by a Democratic state senator and made public Friday afternoon found McGeachin had the authority as acting governor to issue the order, but that the order itself appeared to run counter to both the Idaho Constitution and a governor's statutory executive order authority.

The attorney general's office said there is no law prohibiting mask mandates. The office said that McGeachin's order didn't seek to ensure laws are faithfully executed, but “oddly, it seems to have been issued in an effort to undermine the existing authorities of the state and its political subdivisions to issue mask mandates.”