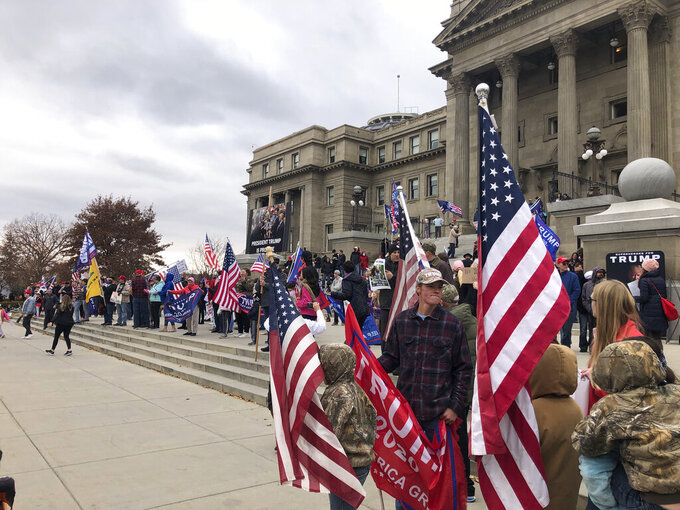 BOISE, Idaho (AP) — Idaho residents should wear a face covering to slow the spread of COVID-19 and help protect veterans, many of whom are at greater risk of serious health complications if they get the virus, Gov. Brad Little said Monday.

The Republican governor made the comments in an opinion piece released two days before the nation honors its veterans with Veterans Day, and as a veterans home in Boise is in the midst of a coronavirus outbreak that has killed six veterans.

“Our veterans bravely encountered bullets and bombs so that you can have the freedom to control your own actions,” Little wrote. “And your personal actions are the one and only thing that will defend our veterans from succumbing to the enemy virus.”

Marv Hagedorn, chief administrator for the Idaho Division of Veteran Services, said Monday that one other veteran died at the home during an earlier outbreak last summer. He said the dead include veterans from World War II, Korea and Vietnam.

“It makes me very sad,” said Hagedorn, who also urges the wearing of masks. “We all become a big family.”

Johns Hopkins University reports that Idaho through Sunday had more than 72,000 infections and nearly 700 deaths. The virus has surged in the state in recent weeks.

Little has been wearing a mask in public and encouraging others to do so since the spring when he issued a stay-at-home order that lasted about four weeks. His four-stage plan to maintain healthcare capacity while reopening the economy relied heavily on voluntary mask-wearing to slow the spread of the virus.

But he has acknowledged he has failed to get the level of mask-wearing he's sought. Late last month he imposed a return to modest restrictions as the state's intertwined healthcare system showed early signs of buckling. But Little didn't issue a statewide mask mandate despite repeated calls for such a mandate by medical professionals.

“Idahoans value local control and the local approach to addressing important issues,” his spokeswoman, Marissa Morrison, said in an email to The Associated Press. “The Governor will continue to support those local leaders who make tough decisions to protect our at-risk citizens.”

Ten of Idaho's 44 counties and 10 cities have issued mask mandates.

In red-state Idaho, mask-wearing has become for many a political statement. President Donald Trump has been dismissive and disdainful of mask-wearing despite contracting the virus and being hospitalized at Walter Reed National Military Medical Center last month.

Nearly 64% of those who voted in the Nov. 3 election in Idaho supported Trump in his losing bid for a second term. On Saturday, several hundred Trump supporters, few wearing masks, gathered at the Idaho Statehouse steps to protest election results.

Meanwhile, President-elect Joe Biden is imploring Americans to wear masks to slow the spread of the coronavirus.

And in Utah, Republican Gov. Gary Herbert on Sunday declared a state of emergency and ordered a statewide mask mandate in an attempt to stem a surge in coronavirus patient hospitalizations that is testing the state’s hospital capacity.

Hagedorn said that veterans homes in Lewiston and Pocatello have so far managed to keep the virus out. He said that about 25% of staff at the Boise facility have either been infected or are infected with the virus, forcing the hiring of contract staffing.

The Coronavirus Financial Advisory Committee last week approved $2 million to help with staffing at the Boise veteran's home as well as extra costs for personal protective equipment to prevent the spread of the virus. Hagedorn said he doubts the agency will have to use the full $2 million unless there are outbreaks in the Lewiston and Pocatello veterans homes.

Little in the opinion piece emphasized the wearing of masks to prevent that from happening.

“Our veterans need us to get tough and put up with these minor inconveniences for a relatively short period of time so they can have a fighting chance against the COVID-19 enemy that is rapidly advancing on them,” he wrote.