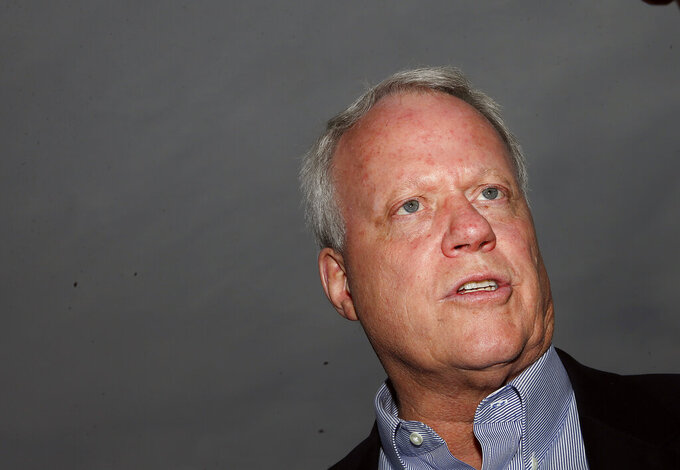 FILE - In this May 17, 2014 file photo Rep. Paul Broun, R-Ga, and candidate for US Senate talks to voters during the "Grillin with the Governor" campaign event in Buford, Ga. Broun is running in Georgia’s 9th Congressional District. (AP Photo/John Bazemore, File)

ATLANTA (AP) — All the Republicans running in Georgia's 9th Congressional District are pro-Trump, pro-gun and anti-abortion. That's where the work begins to tell them apart.

A runoff, if needed, would be held between the top two Republican finishers Aug. 11. The Republican nominee will face the winner of a three-way Democratic contest among Devin Pandy, Brooke Siskin and the Rev. Dan Wilson.

The district covers all or part of 20 counties in northeast Georgia, including all of Hall County and parts of Forsyth and Clarke counties.

Some leading candidates saying voters should choose a representative of pure conservative ideals, while others say voters should seek an effective lawmaker.

Broun says he’s running to “save America, to make sure liberty and freedom are preserved in this country” and says voters should choose him because he has a history of anti-abortion and gun rights activism.

“I’ve been an activist," he said. "They just say they support it. I’ve been in the fight.”

“I’m going to investigate China, the World Health Organization, the (Centers for Disease Control) and the (Food and Drug Administration),” Broun vows.

Broun lost a Senate primary in 2014 and lost to Collins in a comeback bid in 2016. His departure from Congress was clouded by the conviction of his former chief of staff on charges related to funneling congressional funds to Broun's campaign.

“It’s history. It’s done," Broun said. "They found absolutely no wrongdoing on my part after a thorough investigation.”

Gurtler is a state representative who's been a thorn in the side of Republican leaders. Some have dubbed him “Dr. No” for how often he votes against legislation. Gurtler, who declined interview requests from The Associated Press, said in an emailed statement that he seeks to “fight the establishment,” which he characterizes as not only Democrats but many Republicans.

“It has to do with the constitutionality of the bills, if it increases the size, the scope or the intrusiveness of government," Gurtler said his “no” votes during an Atlanta Press Club debate earlier this month.

Broun slams Gurtler for failing to support a state House resolution this year congratulating Trump for killing an Iranian general whom American officials described as a terrorist. Broun said Gurtler showed his “ignorance” and “immature idealism.” Gurtler defends the move.

“I will never vote for a resolution that praises Bush and Obama’s nation-building or that upholds the dangerous United Nations,” Gurtler wrote.

The Republican from Tiger has also been attacked for speaking to American Patriots USA, which includes members with a history of white supremacy. Gurtler told the Atlanta Journal-Constitution that a voter invited him to speak to “a pro-gun, conservative group that supports President Trump.” In a statement, he said “I abhor bigotry and hate of any kind. Racism doesn’t have any place in our community.”

Gurtler attacked Tanner, who is endorsed by former Gov. Nathan Deal, slamming his supporting of a 2015 law raising taxes for transportation.

“I know it’s hard to wrap your head around actually accomplishing something in elective office," Tanner replied during the debate. "I know some anarchists believe there is not any role for government.”

“We need someone who is able to be effective in Washington,” Tanner said. “I’m unapologetically conservative, but I’m effective.”

Wilkinson who touts his background in agricultural education and connections to different parts of the district.

“I just think I could be an advocate for people in this congressional district and for people in agriculture and education," he said.

Wilkinson is running a less sharp-edged campaign than many competitors.

“I’m a Republican but I’m not mad about it," Wilkinson said, paraphrasing a line once uttered by Arkansas Gov. Mike Huckabee.

Clyde cites the experience of having $940,000 seized in 2013 by the IRS, an example used to win restrictions.

Underwood said voters should choose him because he can hold his own in debates.

“I think we need someone who frankly has a healthy distrust of government to articulate those points," Underwood said. “That’s a philosophy that I can take and stand on the floor of the House and have a debate with the speaker and have a debate in committee.”

The spelling of Paul Broun's last name has been corrected.