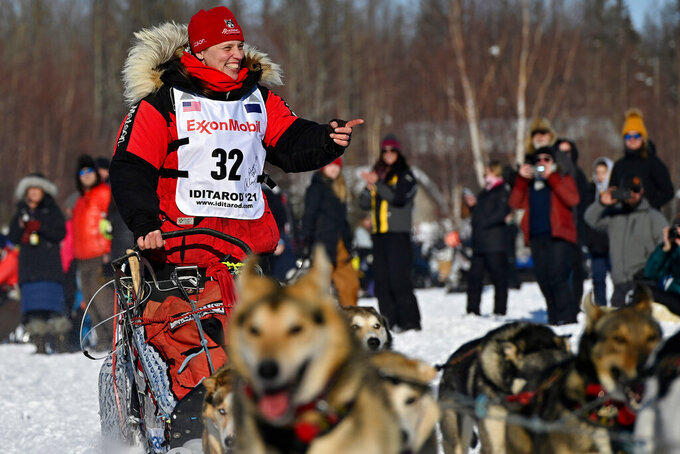 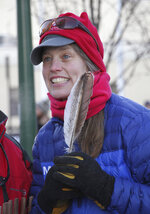 ANCHORAGE, Alaska (AP) — Veteran musher Aliy Zirkle’s last Iditarod Trail Sled Dog Race ended not with her first championship but with a medical rescue flight to Anchorage, suffering from a concussion and other injuries to her upper torso, officials said Tuesday.

Zirkle, a fan favorite, sustained multiple injuries after suffering a fall while coming into the checkpoint in Rohn on Monday evening, Alaska Air National Guard Senior Master Sgt. Evan Budd said in a statement. The statement did not name Zirkle, but Lt. Col. Candis Olmstead, a spokeswoman for the Alaska National Guard, confirmed to The Associated Press that Zirkle was the musher rescued.

A volunteer at the checkpoint about 135 miles (217 kilometers) northwest of Anchorage informed race marshal Mark Nordman of her injuries. Nordman arranged for a rescue, and the Alaska Air National Guard dispatched a Pave Hawk helicopter to the checkpoint.

Zirkle, 50, was flown to an Anchorage hospital, where she was treated and released for a concussion and “orthopedic injuries” to her upper torso, according to a statement from the Iditarod that did not elaborate on her injuries or nature of the fall. A spokeswoman did not immediately respond to a follow-up email from The Associated Press.

Zirkle was resting with family in Anchorage with plans to travel the 380 miles (612 kilometers) north to their home in Two Rivers, Alaska, when able, the Iditarod said.

The 14 dogs with her in Rohn are uninjured and being cared for by volunteers. They will be flown to Anchorage on the first available flight, and then driven to Two Rivers.

Zirkle and her husband, musher Allen Moore, own SP Kennel in Two Rivers, Alaska, near Fairbanks.

Zirkle announced on her kennel’s website last month that this would be her last race, noting that the Iditarod has been physically and mentally challenging.

“I know that in the not so distant future, I will not be able to give it my 100%. So, I am retiring before I have to retire,” she wrote.

She told the AP in 2017 that she suffered panic attacks and sought counseling after a man on a snowmobile attacked her and musher Jeff King in separate incidents in 2016 near the checkpoint in Nulato, Alaska. One of King’s dogs was killed.

“Over the course of almost two hours, one man, by using his snowmachine, made prolonged, aggressive and what I believe to be deliberate threats to me and my team,” Zirkle said in a statement just days after the attack. Snowmachines are what Alaskans call snowmobiles.

“I was terrified. Had it not been for my defensive reactions, we could have been maimed or killed,” she said at the time.

Zirkle has never won the Iditarod, but endeared herself to fans with three straight second-place finishes from 2012-2014. Since then, she’s had four other top 10 finishes. Last year, she placed 18th.

This year’s race started Sunday with 46 mushers, and Zirkle and one other musher have withdrawn.

The Iditarod normally goes from the Anchorage area to Nome. But because of the pandemic, mushers are traveling in a loop from Willow, about 50 miles (80 kilometers) north of Anchorage, to the ghost town of Iditarod, and then back to Willow for the finish. To avoid spreading COVID-19, mushers are breezing through most rural Alaska villages that serve as checkpoints, and they are instead resting in tent camps outside towns.

Ryan Redington, grandson of the race’s co-founder Joe Redington Sr., was leading the Iditarod Tuesday morning, the first musher to arrive at the checkpoint in the village of Nikolai.