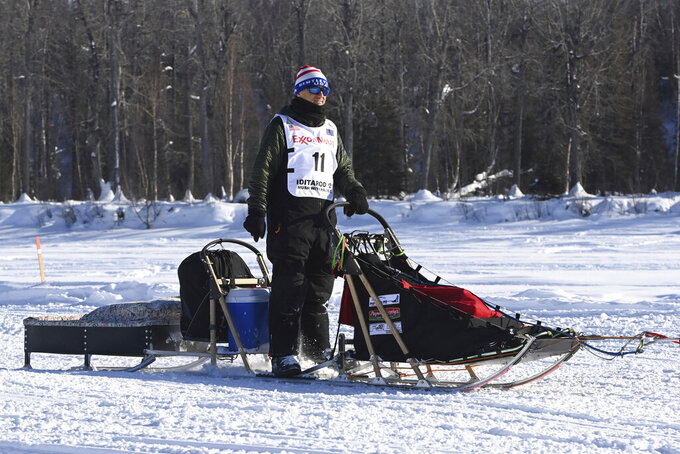 Gunnar Johnson travels down the Susitna River during the start of the Iditarod Trail Sled Dog Race on Sunday, March 7, 2021. (Bill Roth/Anchorage Daily News via AP)

JUNEAU, Alaska (AP) — A musher taken out of the Iditarod Trail Sled Dog Race after testing positive for COVID-19 at a checkpoint is believed to have been exposed by a person who had been in his quarantine bubble before the race started, a doctor working on the race said Thursday.

Dr. Jodie Guest, an epidemiologist working on the race, told reporters musher Gunnar Johnson and all other mushers tested negative on March 4 and all were also tested on Sunday, before the race start. On March 5, Johnson was in a vehicle with a person “who was part of two people in his bubble that he was quarantining with prior to the race, between his 14-day-before-the-race and his three-day-before-the-race test,” she said.

The person was exposed outside the bubble with Johnson and tested positive on March 6, she said. Johnson tested negative on Sunday, when he began the race, Guest said. It wasn’t immediately clear if officials were aware of the March 6 test result when the race started. A message seeking comment was sent to the race’s media contact.

Guest said contact tracing related to Johnson's positive test was underway, including trying to determine the identity of two mushers who had shared a tent with him. Those unfamiliar with the race may not understand why that's a challenge, she said. But people who are bundled up “crawl in and out” during the night and there usually isn't much talking, she said.

Guest said the risk to others who have been on the trail “is probably at a maximum of three people.” Johnson, who tested positive outside the McGrath checkpoint on Wednesday, had not been inside any building since he left for the start of the race on Sunday, she said.

Johnson is from Duluth, Minnesota. Race officials Wednesday said he was asymptomatic. Guest said Thursday he was flown on a race plane back to Anchorage with a person who was considered fully vaccinated.

Tests on volunteers and community members who worked at a checkpoint at Nikolai returned negative, and an extra test was being added for mushers at McGrath as they head toward the finish, Guest said.

This year's race route, modified because of the pandemic, is a loop that starts near Willow, about 50 miles (80 kilometers) north of Anchorage, goes to the ghost town of Iditarod and then back to Willow for the finish. Johnson's test at McGrath on Wednesday came as he was heading toward the turnaround point.

In an effort to guard against spreading the virus, mushers are going through most rural Alaska villages that serve as checkpoints and resting instead in tent camps outside towns.