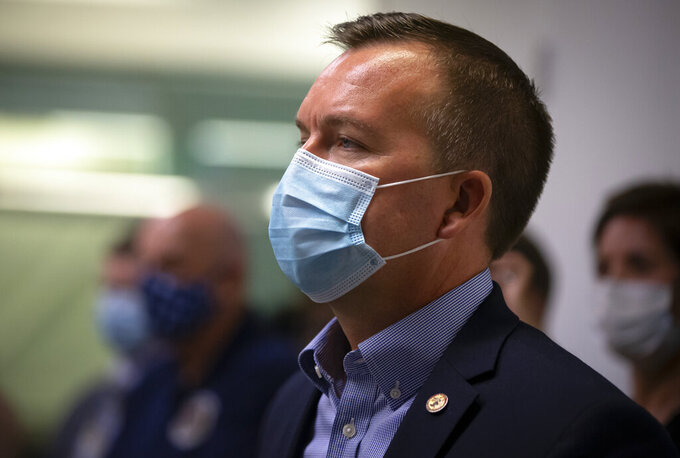 SPRINGFIELD, Ill. (AP) — Illinois launched a $5 million advertising campaign on Monday to remind people to cover their faces in public to slow the spread of COVID-19, which has had a resurgence in the state since Gov. J.B. Pritzker loosened restrictions to help the state's suffering economy.

The “It Only Works if You Wear It” ads will run in English and Spanish in a wide range of formats, including television and social media. They will be targeted in real-time to areas of the state that are having increased numbers of confirmed coronavirus cases in order to maximize the campaign's impact, officials said.

The ads, which will be covered by federal coronavirus relief funds, prominently feature people in their late teens or 20s — a demographic that has been particularly hard-hit in recent weeks. They liken wearing a face mask during the pandemic to other common safety precautions, such as wearing a seat belt, life jacket or bike helmet.

“No one is asking you to wear a mask forever,” Pritzker said during a news conference. “But for the time being, until we see a very effective treatment or a vaccine, the best way to safely get to the other side of this emergency is for all of us to follow the mitigations recommended by doctors."

Illinois has required people to wear masks since May 1 in public situations where it's difficult to maintain 6 feet of distance. Experts say face coverings help protect wearers and those around them.

The campaign is likely to face a backlash from outspoken mask critics in more conservative parts of the state, such as in central and southern Illinois, where there were far fewer cases than in the Chicago area. They object to government telling them they have to wear face coverings, and several counties have sued the Democratic governor over the requirement.

The Illinois Department of Public Health on Friday urged officials in 11 counties that were listed in “warning level” status to toughen their public restrictions to try to slow upticks in the spread of COVID-19. Eight of the counties are in the far south of the state.

With Illinois' case count dropping in late June, Pritzker lifted the most severe restrictions on social interaction, even re-opening bars and restaurants ahead of schedule, though with some safeguards still in place.

The numbers went right back up. The 10,593 new cases reported last week was the highest since late May and was more than double the 4,973 in the week restrictions were lifted. The average number of daily COVID-19 deaths has dropped significantly, likely in part because it is infecting younger, healthier people who recover more easily and because health experts know more about how to treat the most seriously ill patients.

There were 1,298 confirmed new confirmed COVID-19 cases and 10 new deaths announced Monday, raising the state's total number of cases since the pandemic started to 183,241 and its death toll to 7,526.

Although getting people to wear face masks is the Pritzker's main COVID-19 prevention focus, he said he won't authorize noncompliance fines similar to those issued for not wearing seat belts.

"The first thing that we ought to do is ... warn," Pritzker said. “The idea here is not to chase people down on the street and say, ‘Hey you’re not wearing a mask and I’m gonna throw a ticket at you.’”