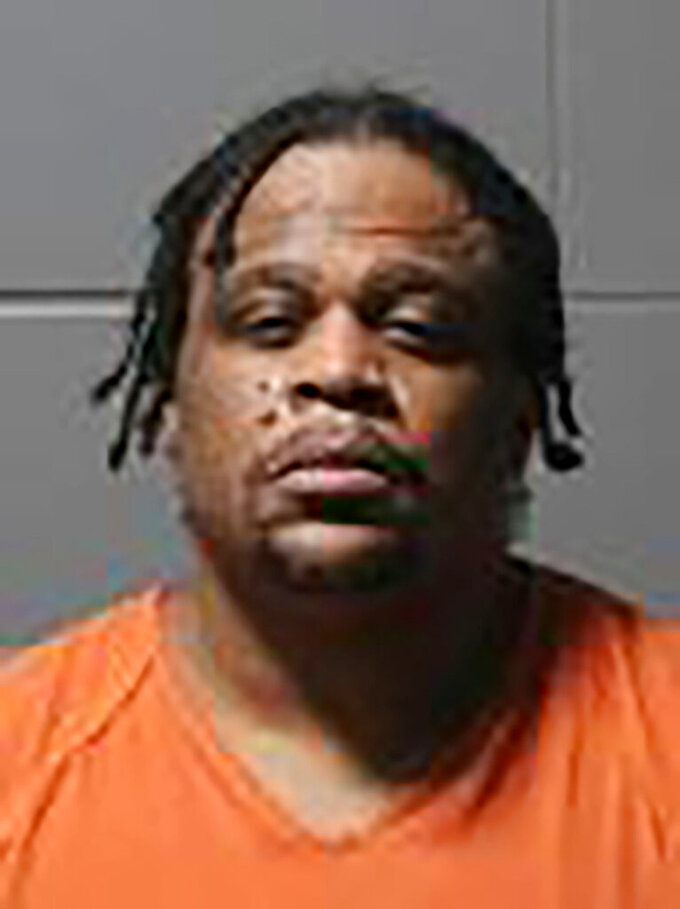 In this Nov. 2020, photo provided by the Scott County (Iowa) Sheriff's Office is Henry Earl Dinkins. Dinkins, a registered sex offender was charged last July, with violating sex offender registry requirements by failing to update his address, and having contact with minors. On Wednesday, April 5, 2021, authorities announced that Dinkins, who is still in custody, has been charged with murder and kidnapping in the death of Breasia Terrell, a Davenport girl who disappeared last July. (Scott County Sheriff's Office via AP)

IOWA CITY, Iowa (AP) — An Iowa parolee tentatively agreed to serve a lengthy prison term on Illinois drug charges days before he allegedly killed a 10-year-old girl, but was allowed to remain free on bond until a plea hearing, a prosecutor said Wednesday.

Henry Dinkins indicated during a hearing last July 7 that he would accept a deal to plead guilty to possession with intent to deliver methamphetamine and be sentenced to eight years in prison, said Geno Caffarini, the state's attorney in Bureau County, Illinois.

Dinkins, 48, said he needed more time to get his affairs in order before returning to prison, and a hearing was scheduled for July 22 for him to enter his plea, Caffarini said.

Police say that on early July 10, Dinkins kidnapped 10-year-old Breasia Terrell from a Davenport apartment where she was staying the night with her half brother, who is Dinkins’ son. They say he shot her to death and discarded her body in a pond in rural eastern Iowa, where her remains were discovered in March after a monthslong search.

“I feel bad with that whole thing that happened. That’s a tragedy. Didn’t expect it from this guy,” Caffarini said.

Dinkins, a registered sex offender with a long criminal history, was charged with first-degree murder and kidnapping earlier this month. He has yet to enter a plea and his public defender hasn't returned messages seeking comment.

The Associated Press reported Tuesday that Dinkins had been granted parole in Iowa just months before the girl’s death, in March 2020, and released from a Davenport residential correctional facility. The early release was granted even though Dinkins was facing the felony meth charges in Illinois, which stemmed from an April 2019 traffic stop in which police found about two pounds of the drug in his car.

Iowa Department of Corrections spokesman Cord Overton said Wednesday an initial review of Dinkins’ parole and supervision has not “identified any deviation from policies or procedures for individuals” with similar risk factors and convictions. He said Illinois authorities had not placed a detainer on Dinkins for the drug charges, and so he was released rather than transferred to face them.

Caffarini said that Dinkins had been released on $100,000 bond after his April 2019 arrest in Illinois and had made every court appearance in the case. He said the trial had been delayed several times as a result of the coronavirus pandemic, which led to court backlogs across the nation.

Dinkins did not formally enter a guilty plea at the July 7 hearing, and could have changed his mind before the July 22 hearing, Caffarini said.

“There was nothing binding him to that plea agreement,” he said.

Caffarini chastised Overton, the Iowa corrections spokesman, for releasing a statement with “misinformation” claiming that Dinkins’ sentencing had been delayed. Since he hadn’t yet pleaded guilty, “there never was a sentence to stay,” he said.