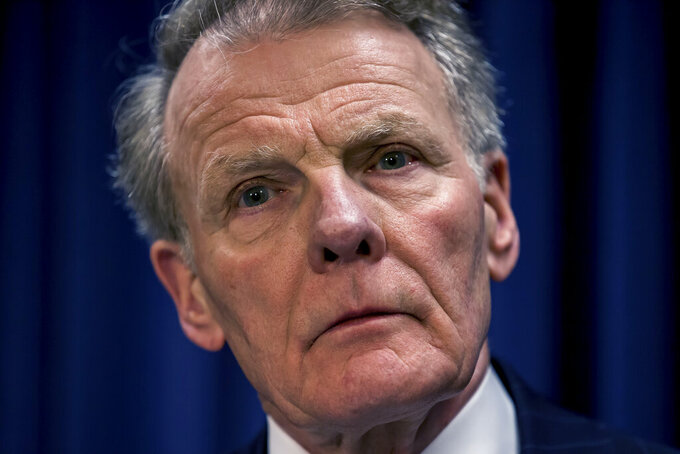 CHICAGO (AP) — Four people, including a close friend of Illinois House Speaker Michael Madigan, entered not guilty pleas Wednesday in a federal bribery case alleging a scheme with the state's largest utility in which they provided do-nothing jobs to Madigan loyalists in exchange for the speaker's help with legislation.

The four, who were indicted last month on bribery and conspiracy charges, appeared via video conference before U.S. District Judge Harry Leinenweber because of the ongoing coronavirus pandemic.

Those who entered the not guilty pleas were Michael McClain, 73, of Quincy; former ComEd CEO Anne Pramaggirore, 62, of Barrington; lobbyist and former ComEd executive John Hooker, 71, of Chicago; and Jay Doherty 67, a consultant and former head of the City Club of Chicago.

Madigan, the longest-serving House speaker in U.S. history, has not been charged in the alleged scheme, but the charges involve Madigan loyalists and a law firm favored by him. McClain is a longtime friend of the powerful Democratic lawmaker who served with him in the House decades ago before becoming a lobbyist representing ComEd.

According to the indictment, the defendants provided jobs, conspired to have ComEd hire Madigan's preferred law firm and accepted students from Madigan's ward for an internship program despite the fact that some didn't meet its requirements.

In July, ComEd admitted in a deferred prosecution agreement signed with the U.S. attorney for the northern district of Illinois that its top administrators offered no-work lobbyist jobs and sub-contracts to allies of Madigan in exchange for favorable legislation. Madigan is identified in the document only as House speaker.

Madigan, though not charged, was singled out earlier this year when prosecutors announced ComEd would pay $200 million under a deferred prosecution deal that requires the utility to fully cooperate with the ongoing investigation.

The case prompted a legislative investigations into Madigan's dealings with ComEd and three other leading Illinois Democrats — Gov. J.B. Pritzker and U.S. Sens. Dick Durbin and Tammy Duckworth — have called on him to step down as state party chairman.

His chances of remaining in power were dealt another serious blow Tuesday when Rep. Kathleen Willis of Addison, a member of Madigan’s Democratic leadership team, said she will not support him for another term leading the chamber.

Madigan, though, has denied any wrongdoing or any knowledge about a bribery scheme or expectation that anyone be hired for a job in exchange for an action he took.

Leinenweber ordered the four to return to court for a status hearing on Feb. 16. All of the are free on $10,000 recognizance bonds that did not require them to post any money.