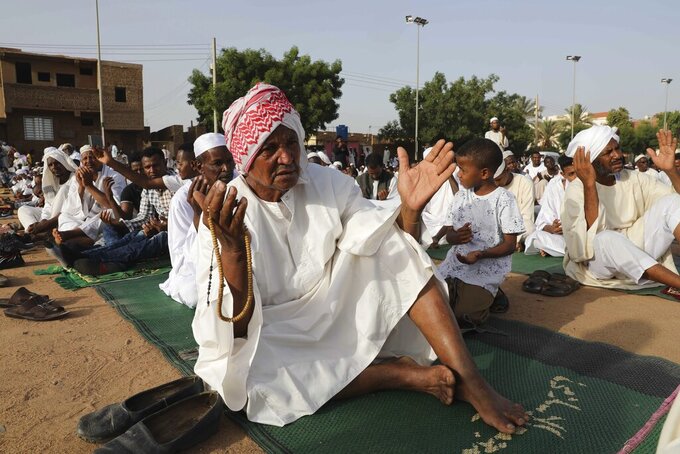 FILE - In this May 24, 2020 file photo, Sudanese worshippers gather for Eid al-Fitr prayers, the Muslim holiday which starts at the conclusion of the holy fasting month of Ramadan, in Khartoum, Sudan. The International Monetary Fund has signed off on Sudan’s economic reform program, a move that can eventually allow the highly-indebted African country receive debt reliefs and hence rebuild its battered economy. The IMF released a statement Wednesday, Sept. 23, 2020, saying that its staff will be monitoring the implementation of a “home-grown” economic restructuring program. (AP Photo/Marwan Ali, file)

CAIRO (AP) — The International Monetary Fund has signed off on Sudan's economic reform program, a move that can eventually allow the highly-indebted African country to get debt relief and move ahead with rebuilding its battered economy as it transitions to democratic rule.

Until the end of June 2021, IMF staff will be monitoring the implementation of a “home-grown” economic restructuring program that aims at “stabilizing the economy, removing distortions, improving competitiveness, and strengthening governance,” according to an IMF statement released Wednesday.

Sudan has been ruled by a transitional military-civilian government following last year’s pro-democracy uprising that toppled longtime autocrat Omar al-Bashir. Elections could possibly be held in late 2022. The current prime minister, Abdalla Hamdok, is a former economist with the United Nations.

Battered by decades of U.S. sanctions and mismanagement under al-Bashir, Sudan suffers from high inflation, a huge budget deficit and widespread shortages of essential goods, including fuel, bread and medicine. The country has close to $60 billion in foreign debt, meaning debt relief and access to foreign loans are widely seen as the country's gateway to economic recovery.

“A key element to the success of the program is sufficient donor funding to support the population through the difficult transition to a well-functioning market-based economy," said Antoinette Sayeh, IMF Deputy Managing Director and Acting Chair.

Earlier this year, Sudan requested the IMF endorse an economic plan that envisages several fiscal adjustments, including further eliminating fuel subsidies and broadening the tax base, the IMF statement added. The IMF's backing is required for eventual debt relief by official creditors.

“Sudan’s external debt is high and with longstanding arrears which severely limit access to external borrowing," said Sayeh. "A strong track record of macroeconomic performance and implementation of reforms, together with a comprehensive strategy of arrears clearance and debt relief supported by Sudan’s development partners, is required for addressing Sudan’s high debt overhang.”

In June, the IMF announced an initial agreement was reached with Sudanese authorities on a reform deal. At the time, an IMF official said Sudan's debt had reached over 190% of its GDP in 2019.

Inflation reached 167% in August, and authorities declared an economic emergency on Sept. 10 following a dramatic plunge in the value of the national currency. The Sudanese pound went from 183 pounds to the dollar on the black market in August down to around 250 pounds to the dollar earlier this month, despite its official rate of 57 pounds to $1.

The coronavirus pandemic has exacerbated the economic despair, throwing millions of laborers out of work.

Flash floods have also struck much of Sudan since late July, killing more than 100 people and inundating over 100,000 homes. Authorities declared the country a natural disaster area earlier this month and imposed a three-month state of emergency.