Immigrant teens to be housed at Dallas convention center 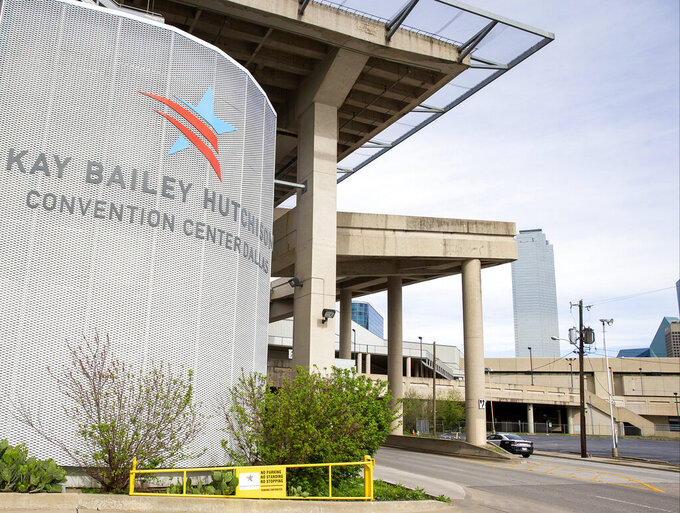 The Kay Bailey Hutchison Convention Center stands in Dallas on March 29, 2020. The U.S. government wants to house up to 3,000 immigrant teenagers at the center as it struggles to find space for a surge of migrant children who have inundated the border and strained the immigration system just two months into the Biden administration. (Juan Figueroa/The Dallas Morning News via AP)

DALLAS (AP) — The U.S. government plans to house up to 3,000 immigrant teenagers at a convention center in downtown Dallas as it struggles to find space for a surge of migrant children at the border who have strained the immigration system just two months into the Biden administration.

American authorities encountered people crossing the border without legal status more than 100,000 times in February — a level higher than all but four months of Donald Trump’s presidency. The spike in traffic poses a challenge to President Joe Biden at a fraught moment with Congress, which is about to take up immigration legislation, and has required the help of the American Red Cross.

The Kay Bailey Hutchison Convention Center will be used for up to 90 days beginning as early as this week, according to a memo obtained by The Associated Press that was sent Monday to members of the Dallas City Council. Federal agencies will use the facility to house boys ages 15 to 17, according to the memo, which describes the soon-to-open site as a “decompression center.”

The Health and Human Services Department is rushing to open facilities across the country to house immigrant children who are otherwise being held by the Border Patrol, which is generally supposed to detain children for no more than three days. The Border Patrol is holding children longer because there is next to no space in the HHS system, similar to the last major increase in migration two years ago.

A tent facility operated by the Border Patrol in Donna, some 500 miles (804 kilometers) south of Dallas, is holding more than 1,000 children and teenagers, some as young as 4. Lawyers who inspect immigrant detention facilities under a court settlement say they interviewed children who reported being held in packed conditions in the tent, with some sleeping on the floor and others not able to shower for five days.

“I am incredibly proud of the agents of the Border Patrol, who have been working around the clock in difficult circumstances to take care of children temporarily in our care," Mayorkas said in a statement. “Yet, as I have said many times, a Border Patrol facility is no place for a child.”

Asked about housing migrant teens at the convention center, White House press secretary Jen Psaki said Monday that the administration has been looking for additional facilities for unaccompanied children but that she would have to look into the specifics of the arrangement in Dallas.

“Certainly we would ensure that we’re meeting the standard that we have set out,” Psaki said.

The growing number of child arrivals comes at politically charged moment, with Congress taking up immigration legislation this week. Biden has delighted pro-immigration advocates by backing a bill to offer a path to citizenship to all of the estimated 11 million people in the U.S. illegally. He also suspended several Trump-era policies to deter asylum, including one that forced them to wait in Mexico for court hearings in the U.S.

Republicans have seized on the numbers to portray a border spinning out of control.

“This crisis is created by the presidential policies of this new administration,” House Minority Leader Kevin McCarthy said Monday while leading a large congressional delegation to El Paso, Texas. “There’s no other way to claim it than a Biden border crisis.”

Democrats criticized large camps set up in Tornillo, Texas, and Homestead, Florida, to house children during previous emergencies, including in 2018 when the Trump administration separated thousands of immigrant families.

Biden has kept pandemic-related powers in place that allow him to immediately expel people who enter the country without legal status, denying them an opportunity to seek asylum. Biden aides have yet to say when the administration may lift that authority. It does not extend to children who cross the border alone.

U.S. authorities encountered children traveling alone 9,457 times in February, nearly double the number in January and the highest since May 2019, when the figure neared 12,000 during the peak of a Trump-era surge.

The memo sent to Dallas City Council members says the Federal Emergency Management Agency and HHS will “be responsible for providing shelter management and contracts” for food, security, cleaning, and medical care at the convention center. Dallas previously offered space to HHS during the 2014 surge of crossings of immigrant children.

Dallas City Manager T.C. Broadnax said in a statement that “collective action is necessary, and we will do our best to support this humanitarian effort.” He referred questions to HHS, which did not respond to requests for comment Monday.

HHS also has said it will house immigrant youths in Midland. Teenagers began arriving Sunday at a converted camp for oilfield workers where volunteers from the American Red Cross will care for them. BuzzFeed News first reported the opening of the Midland facility.

The Red Cross has sent about 60 volunteers to the facilities in Midland and Dallas and expects to deploy more in the coming days, said Greta Gustafson, a spokeswoman for the group.

The surge at the U.S.-Mexico border has presented a major test for Biden's administration, which promised to break from the more restrictive measures against migrants enacted by Trump. Biden has left in place some Trump policies, notably the expulsions of immigrant adults and families under a public-health declaration citing the coronavirus pandemic.

Biden declined to reinstate public-health expulsions of children, and his administration has also been unable to expel many families in South Texas due to policy changes in Mexico's Tamaulipas state, across from the Texas Rio Grande Valley.

Border agents are apprehending more than 400 children a day on average, far more than the number of children that HHS is processing and releasing to sponsors. The Biden administration has announced several policy changes to try to expedite releases, but experts and immigration lawyers say the government could do more to speed up the process, particularly of releasing children to their parents in the U.S.