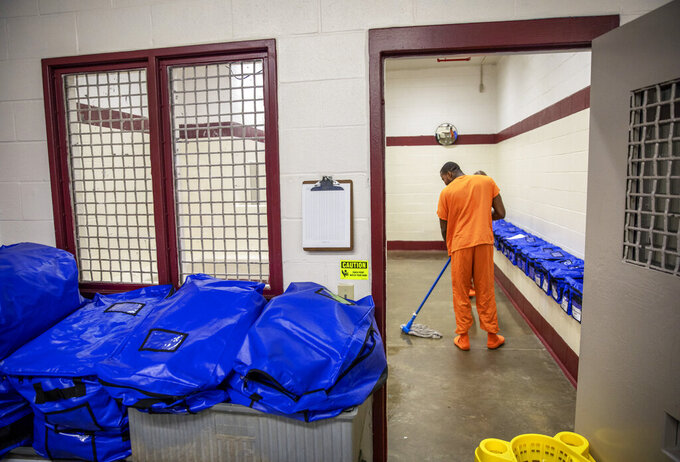 FILE - In this Nov. 15, 2019 file photo, a detainee mops the floor at the intake station at the Stewart Detention Center in Lumpkin, Ga. Federal authorities said a 57-year-old Mexican man who was being held in federal immigration detention at the center in southwest Georgia died on Saturday, Jan. 30, 2021, from complications of COVID-19. (AP Photo/David Goldman, File)

COLUMBUS, Ga. (AP) — A 57-year-old Mexican man who was being held in federal immigration detention in southwest Georgia has died from complications of COVID-19, federal authorities said.

Felipe Montes died early Saturday at a hospital in Columbus from “cardiopulmonary arrest, secondary to complications of coronavirus disease," according to a U.S. Immigration and Customs Enforcement news release. Montes entered ICE custody on Dec. 28 and had been held at the Stewart Detention Center in Lumpkin until Jan. 10, when he was admitted to the hospital.

Montes was the fourth detainee held at the southwest Georgia immigration detention center to die after testing positive for COVID-19, according to ICE's website. A total of nine people who tested positive for the coronavirus have died while in federal immigration custody.

The Stewart Detention Center had recorded a total of 474 confirmed cases of COVID-19 as of the middle of last week, second only to La Palma Correctional Facility in Eloy, Arizona, which had 544 confirmed cases.