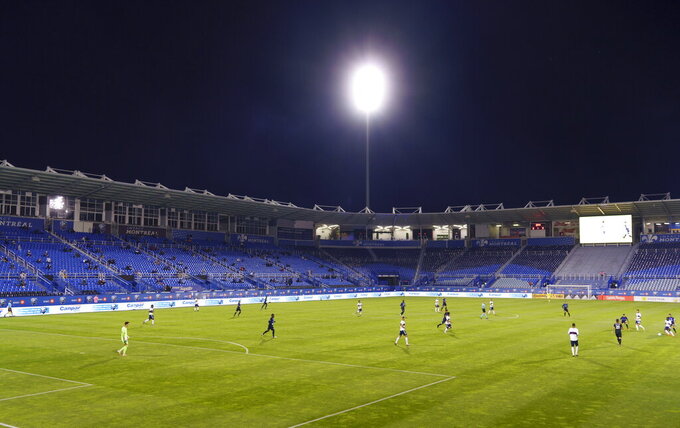 The Montreal Impact face the Vancouver Whitecaps in a nearly empty Saputo Stadium during the first half of an MLS soccer match Tuesday, Aug. 25, 2020, in Montreal. (Paul Chiasson/The Canadian Press via AP)

Romell Quioto and Lassi Lappalainen scored in the first half and the Montreal Impact beat the Vancouver Whitecaps 2-0 on Tuesday night.

It was the first game in exactly a month for the Impact (3-2-1), who lost to Orlando City on July 25 in the knockout round at the MLS is Back tournament.

The Whitecaps (2-6-0), who failed to convert a penalty in the second half, dropped their third straight game after being beaten twice by Toronto FC last week.

The Impact became Canada’s first professional sports team to play in front of fans since the COVID-19 pandemic interrupted play in March.

The crowd of 250 — the maximum permitted inside Saputo Stadium under Quebec’s public-health guidelines — was scattered across eight separate stands in the 20,801-seat venue.

In new coach Thierry Henry’s first home match, the Impact repeatedly exploited the left flank and it led to both goals.

Missed coverage by Vancouver on that left wing gave Saphir Taider yards of space in the 18th minute. The midfielder delivered a lovely out-swinging cross into the box to Quioto, who headed it home.

A deep ball by Emanuel Maciel found the speedy Lappalainen behind the Whitecaps’ back line in the 40th. Lappalainen let the ball settle down before coolly firing into the far corner of the net, out of goalkeeper Thomas Hasal’s reach.