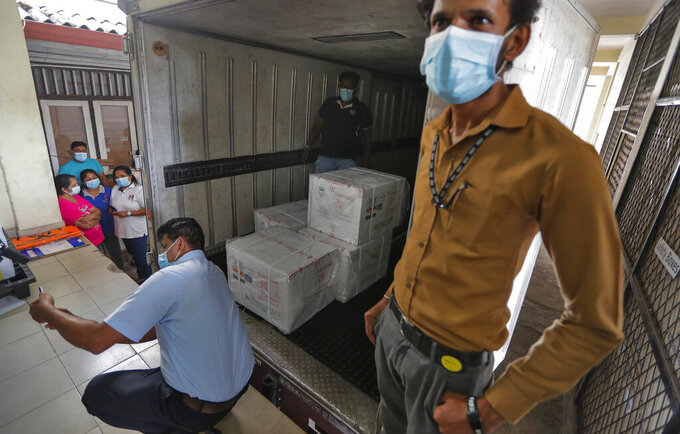 A Sri Lankan health services worker takes a selfie as others unload a consignment of Oxford-AstraZeneca vaccine donated by the Indian government at a medical warehouse next to a plain clothed police officer standing guard in Colombo, Sri Lanka, Thursday, Jan. 28, 2021. Sri Lanka's president on Thursday welcomed the first 500,000 doses of a COVID-19 vaccine from India, which has donated the shots to eight countries in the region. (AP Photo/Eranga Jayawardena)

COLOMBO, Sri Lanka (AP) — Sri Lanka's president on Thursday welcomed the first 500,000 doses of a COVID-19 vaccine from India, which has donated the shots to eight countries in the region.

The Oxford-AstraZeneca vaccine was manufactured by the Serum Institute of India.

Sri Lanka said 150,000 health workers and 115,000 selected military and police troops will be the first to be inoculated at six hospitals in Colombo and its suburbs.

One of the hospitals is reserved for COVID-19 patients while the others have separate wards for the coronavirus.

The Health Ministry plans to expand the vaccination campaign to 4,000 hospitals and health centers in other parts of the country next week.

India’s donation covers 250,000 people and Sri Lanka is making efforts to obtain more vaccines, either through donation or by purchasing them.

The country has ordered 2 million doses of the Pfizer-BioNtech vaccine and is planning to order 3 million more from India. It also expects some from the U.N. COVAX Facility to be able to vaccine 20% of the population.

Sri Lanka has grappled with a fresh outbreak of the disease since October, when two clusters — one centered on a garment factory and the other on the main fish market — emerged in and around Colombo. Since then, it has reported more than 55,000 cases and 260 deaths. An average of 500-900 cases are being reported daily.

“India has played the role of the first responder in the region," India's foreign ministry said in a statement, as President Gotabaya Rajapaksa received the first batch of vaccines at the airport.

India also said it has extended a $400-million currency swap facility to Sri Lanka to ensure the neighbor's financial stability during the pandemic.

India's rival China on Wednesday announced it would provide 300,000 shots of its own vaccine Sinopharm next month after procedures are completed on both sides.