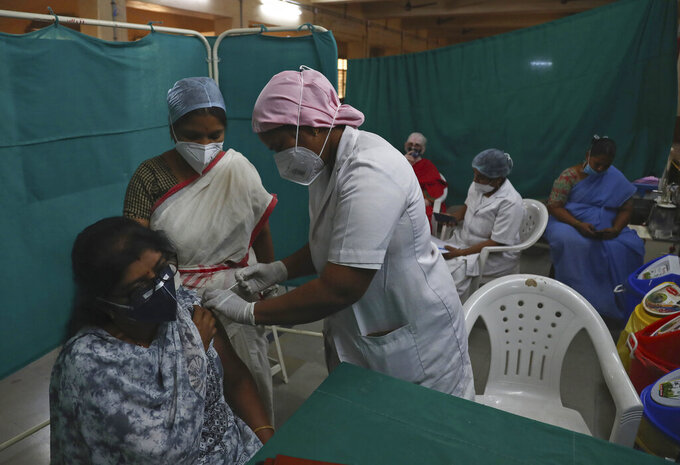 A health worker administers the COVISHIELD vaccine for COVID-19 at a Government Fever Hospital in Hyderabad, India, Thursday, April 1, 2021. India is accelerating its vaccination drive by opening it up for everyone above 45 years just as cases spike sharply after several months. (AP Photo/Mahesh Kumar A.)

NEW DELHI (AP) — There isn’t any room at Sion Hospital in India’s megacity, Mumbai - approximately all 500 beds reserved for COVID-19 patients are occupied. And with new patients coming in daily, a doctor said the hospital is being forced to add beds every second day.

Waiting lists in some hospitals in the city are so unreasonable that “numbers can’t define the burden on hospitals,” said Dr. Om Shrivastava, an infectious diseases expert.

Scenes like this were common last year, when India looked set to become the worst affected country with daily cases nearly crossing 100,000. For several months, infections had receded, baffling experts, then since February, cases have climbed faster than before with a seven-day rolling average of 59,000. On Thursday, India reported more than 72,000 cases, its highest spike in six months.

“I think it’s going to be worse (than last year),” said Shrivastava. “If it doesn’t quell in a few months time, we may be in for the long haul.”

Experts say there is a pressing need for India to bolster vaccinations, which started sluggishly in January. The country is expanding its drive to include everyone over 45 years from Thursday.

But scaling up vaccinations in India has implications beyond its borders. Spotlight on Serum Institute of India - the world’s largest maker of vaccines and key global supplier - to cater to cases at home has resulted in delays of global shipments of up to 90 million doses under the U.N.-backed COVAX program, an initiative devised to give countries access to vaccines regardless of their wealth. Serum Institute declined to comment.

This could have negative consequences worldwide, setting back supplies in developing countries reliant on Indian exports. But some health experts argue that India’s rising caseload is a global public health problem too.

Irrespective of where vaccines are being made, we need to send them to “places where you’re seeing an upward trajectory,” said Bhramar Mukherjee, a biostatistician at the University of Michigan who has been tracking the pandemic in India.

And India certainly qualifies: Nearly all its 28 states have seen a rise. Six states account for more than 78% of India’s total caseload, which at 12 million is the third-highest in the world. Cases have increased six-fold in less than two months, and deaths - a lagging indicator in the pandemic that follows hospitalization - are rising too.

Maharashtra state, home to Mumbai, is behind 60% of daily cases and accounts for about the same percentage of active cases. Capital New Delhi and states of Punjab, Karnataka, Gujarat, Tamil Nadu and Madhya Pradesh are also among the worst-hit.

After a grinding lockdown and falling cases, life in India had returned to normal in many places. Markets are teeming with people, politicians are addressing massive rallies in local elections and a religious gathering in Uttarakhand state is expected to draw hundreds of thousands of devotees in April.

International travel has also resumed in high volumes, bringing in variants first detected in the United Kingdom, South Africa and Brazil. These variants, designated as those of concern, were found in 7% of nearly 11,000 samples sequenced since Dec. 30.

India also confirmed a new and potentially troublesome variant at home. Officials have cautioned against linking the variants to the surge, and experts say more expansive genomic analysis is needed to determine how much they are contributing to the rise.

The new infections have also cast doubt over herd immunity - the threshold at which enough people have developed immunity to the virus, by falling sick or being vaccinated - which was floated by some experts earlier this year to explain dropping cases. The last nationwide serological survey found that 21.4% of adults had been infected before vaccinations began in January, implying that a large section of India's nearly 1.4 billion population remains vulnerable.

“It’s a perfect storm of careless crowd behavior, laxity in government vigilance and a misleading perception of herd immunity,” said K Srinath Reddy, president of the Public Health Foundation of India. “The virus rode through gates which were left wide open."

While 62 million Indians have received at least one shot, only 9 million of them have got both. The pace has picked up recently, with India averaging about 2.2 million doses every day last week.

“This is a drop in the ocean,” said N. K. Ganguly, a microbiologist and former director of the Indian Council of Medical Research. He added that India will need to vaccinate much faster to meet its target of injecting 300 million by the summer.

But attempts at securing more vaccines at home means the delay in shipments to middle- and low-income countries like Indonesia and Nepal.

The Serum Institute of India is a major supplier to COVAX and is contracted to send vaccines to 64 countries through the program, making its role “critical," said Krishna Udayakumar, director of the Duke Global Health Innovation Center.

Even though India has not officially banned any exports, foreign ministry officials have said there may be a need to calibrate the supply schedules from time to time. On Tuesday, India's External Affairs Minister Subrahmanyam Jaishankar tweeted photos of vaccines reaching the Palestinian territories and Paraguay.

So far, issues in the global vaccine supply chain have focused largely on India, which is “unfair,” said Udayakumar, given the high vaccination rates in several wealthier countries.

“India is following the lead of other countries and regions, including the U.S. and EU, in prioritizing domestic needs,” he said.