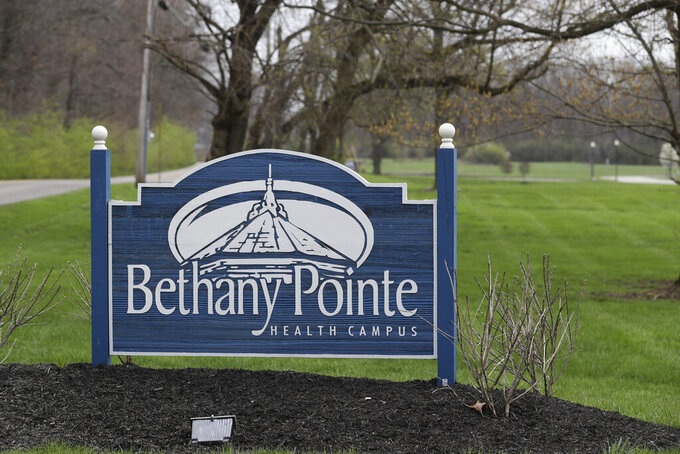 A sign is displayed at the Bethany Pointe Health Campus, Saturday, April 11, 2020, in Anderson, Ind. Multiple residents at the Indiana nursing home have died from COVID-19. The new coronavirus causes mild or moderate symptoms for most people, but for some, especially older adults and people with existing health problems, it can cause more severe illness or death. (AP Photo/Darron Cummings)

The Indiana State Department of Health said the free testing for COVID-19 — the respiratory disease caused by the virus — is scheduled to run Monday through Friday in Evansville and Sellersburg, in southern Indiana, and in Gary and Fort Wayne, in northern Indiana.

Only medical workers, first responders and essential workers with symptoms of COVID-19 will be tested in the partnership between the state agency and local health officials. Those workers must present a driver’s license or other state-issued identification card and employment documentation.

“Tests will be conducted as long as supplies last and will be limited to one individual per vehicle,” the health department said in a news release.

The state agency said in response to queries from The Associated Press about whether it planned to extend the testing beyond next week that it “will continue to evaluate options for drive-thru testing clinics for symptomatic healthcare workers, first responders and essential workers based on the availability of testing supplies.”

The department added in its statement that it had offered a drive-through clinic in the northwestern Indiana city of Merrillville over four days during the past week.

Gov. Eric Holcomb has defined the occupations of essential workers in his stay-at-home orders that now extend through at least April 20 for all but essential Indiana workers.

The health department said Saturday that 30 more Indiana residents had died from illnesses related to COVID-19, raising the state’s death toll to 330. Another 537 Hoosiers had confirmed cases of COVD-19, boosting the state's total number since the outbreak started to 7,435.

The 30 deaths reported Saturday were fewer than the 55 announced Friday, which was the largest single-day figure, though health officials have noted that the deaths they report daily have occurred over multiple days.

Indiana's state health commissioner announced Friday that 24 residents of a central Indiana nursing home hit hard by COVID-19 had died, up from the 11 deaths she had reported Monday for the Bethany Pointe Health Campus in Anderson.

Commissioner Dr. Kristina Box said 16 of the residents who died had tested positive for COVID-19 and the other eight had compatible symptoms. She said Friday that not all of the Bethany Pointe deaths had been included in the state's daily death toll update.