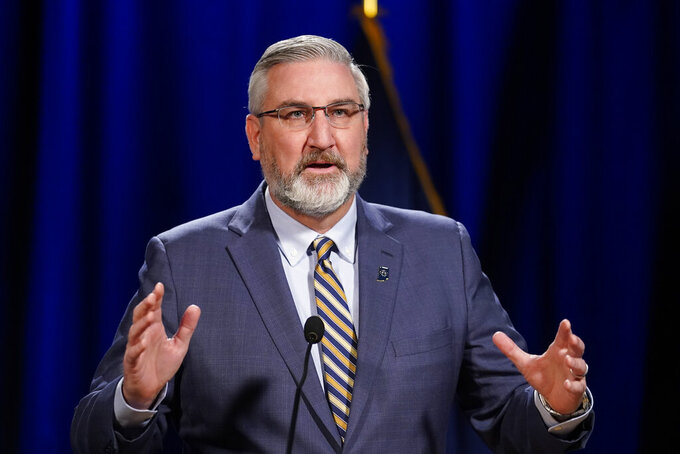 FILE - In this Jan. 19, 2021 file photo, Indiana Gov. Eric Holcomb delivers his State of the State address virtually, in Indianapolis. Indiana's attorney general Todd Rokita took aim Friday, May 1, 2021, at Gov. Holcomb's attempt to block a new law giving state legislators more authority to intervene during public emergencies declared by the governor. A lawsuit filed by the Republican governor on Tuesday, April 27, 2001, challenged the law enacted over his veto two weeks ago giving legislative leaders the power to call the General Assembly into what it calls an "emergency session." (AP Photo/Darron Cummings File)

INDIANAPOLIS (AP) — Indiana will drop out of the federal program providing an extra $300 in weekly payments to unemployed workers and other programs that expanded unemployment benefits during the COVID-19 pandemic, the governor announced Monday.

The changes taking effect June 19 could cut off or reduce unemployment benefits to more than 220,000 people. Republican Gov. Eric Holcomb signed an executive order last week that reinstates a requirement that those receiving unemployment benefits will again have to show they are actively searching for work as of June 1.

The changes come as many businesses blame the extra $300 weekly payment and the ease of obtaining unemployment benefits with making it more difficult to fill job openings.

At least a dozen other states led by Republican governors have already announced they will stop paying the extra $300 benefit as soon as June or July.

Indiana is also ending its participation in a federal program that made gig workers and the self-employed eligible for assistance for the first time and another that provides extra weeks of aid.

Holcomb said jobs are available around the state and pointed to Indiana’s 3.9% unemployment rate for April, which was down from the pandemic peak of 16.9% a year earlier.

“I am hearing from multiple sector employers that they want and need to hire more Hoosiers to grow,” Holcomb said in a statement.

The $300 payments have more than doubled Indiana’s average $280 weekly unemployment payment, which has a maximum of $390 a week. Indiana has had nearly 170,000 people collecting the extra $300 payments, according to the state’s Department of Workforce Development.

As of late April, about 123,000 Indiana residents were receiving payments from the federal program for gig workers and the self-employed who lost income during the pandemic, according to federal reports. About 67,000 people from Indiana were collecting benefits under the federal program extending payments beyond the previous 26-week limit of unemployment benefits.

Republican legislative leaders have urged Holcomb to withdraw Indiana from those federal programs.

The governor’s order from last week means that those seeking unemployment benefits must submit a weekly report on their job-seeking efforts, which can include applying for work, attending job fairs or participating in state workshops.

An analysis by Bank of America economists found that people who had earned up to $32,000 in their previous jobs can receive as much or more income from jobless aid. Some unemployed people say the extra benefit allows them to take more time to look for work, which can make hiring harder.

The Indiana Democratic Party said state officials need to help those in low-paying jobs, including the estimated nearly 900,000 people working for the $7.25 hourly minimum wage. The Republican-dominated Legislature has refused for several years to increase the state’s minimum wage beyond the federal requirement.