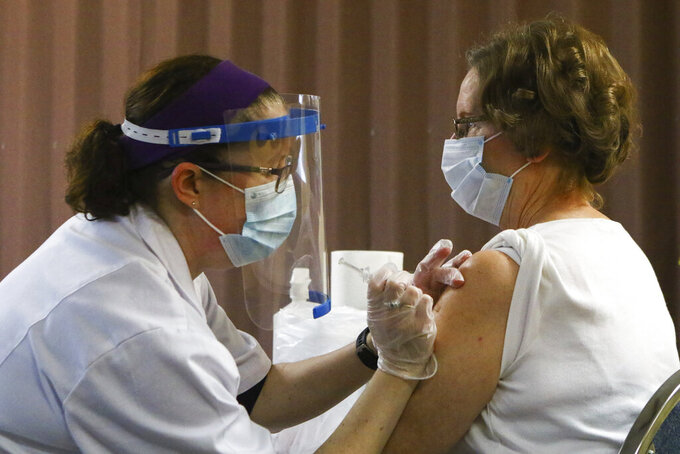 Walgreens pharmacist Mindy Keeton, left, pokes the arm of Martha Metts to give the Moderna COVID-19 vaccine on Monday at the AHEPA apartments in Merrillville, Ind. (Kale Wilk/The Times via AP)

INDIANAPOLIS (AP) — Teachers and other school employees will be able to get COVID-19 vaccinations through Indiana’s shot clinics across the state starting next week.

State health officials said Wednesday that the eligibility expansion comes at the direction of the Biden administration, which earlier allowed teachers to be vaccinated at pharmacies taking part in a federal program.

Indiana currently is allowing anyone ages 50 and older and those with at-risk health conditions to make vaccine appointments. The expansion for teachers starts Monday and includes other school workers such as classroom aides, bus drivers, cafeteria workers and substitute teachers.

“We had a plan. We were executing that plan very methodically. We were using data to drive all of our decisions about who was most at-risk,” Holcomb said Wednesday. “Our federal partners have said you need to add (teachers) in to any site, and so we will do that.”

The Republican governor said he also plans to give a statewide address within the next two weeks to discuss how the state responded to COVID-19 over the last year, and to look ahead at “policies and guidance” that could be forthcoming.

Indiana should soon receive an additional 16,000 doses of vaccine in its weekly allocations, Weaver said, though it’s still unclear when the state can expect additional shipments of the Johnson & Johnson vaccine.

State officials are “being very careful” assigning how to use the state’s initial 54,000 doses of the latest vaccine to be cleared by the U.S. Food and Drug Administration, Weaver continued. Some Johnson & Johnson vaccine has been allocated to hospitals and local health departments, she said, but most are being used to supply to a series of mass vaccination clinics around Indiana.

Additional large-scale clinics to be held at Ivy Tech Community College in Sellersburg the University of Notre Dame are already fully booked, but appointment slots are still available for a fourth mass vaccination site at Calumet New Tech High School in Gary, scheduled for later this month.

The vaccinations come as Indiana has seen COVID-19 death and hospitalization rates fall more than 80% since their December peaks.

Indiana’s current average of about 10 COVID-19 deaths a day is down from the peak of 103 a day in December. Despite that improvement, the state is recording as many coronavirus deaths in less than two weeks than the 119 flu deaths reported over 32 weeks during the 2018-19 influenza season.

Indiana has recorded almost 12,800 confirmed or presumed coronavirus-related deaths over the past year.

Nearly 1.2 million Hoosiers have received their first dose of vaccine, an increase of nearly 147,000 from last week, Box said. Around 745,000 people across Indiana are now fully vaccinated.

More than 138,000 first and second doses have also been administered to residents and staff in long term care facilities, Box said.

The state Department of Health on Wednesday reported 863 new coronavirus infections, bringing the total number of Hoosiers known to have the virus up to 669,164.

The state Department of Health’s weekly tracking map updated Wednesday labels no counties in the highest-risk red category for the fourth week in a row.

This week’s map lists only central Indiana’s Tipton County in the next-riskiest orange category. Thirty other counties remain in the moderate-risk yellow rating, and 61 counties are labeled in the lowest-risk blue category.

Holcomb did not announce any immediate changes Wednesday to what few COVID-19 restrictions remain in place, including the statewide mask mandate.

“We’ll get there... I'm very optimistic,” Holcomb said, referring to Indiana's reopening plans. “But I’m laser-focused on Indiana, and I want to make sure we continue to do the things that are responsible in terms of the effects it has on our public health at large.”