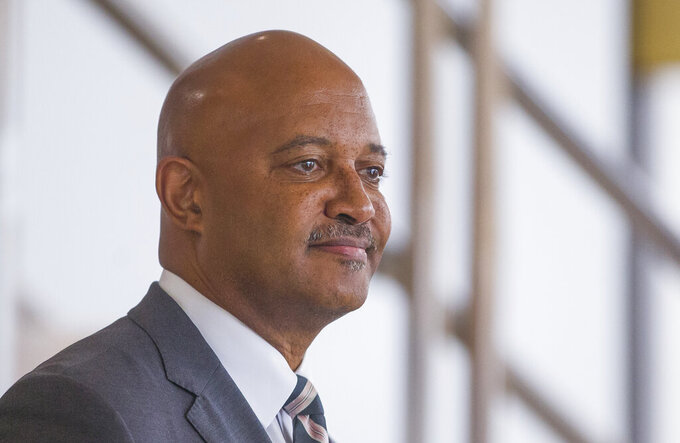 FILE - In this Oct. 3, 2019, file photo, Indiana Attorney General Curtis Hill holds a press conference in South Bend, Ind. Votes are being tallied Friday, July 10, 2020, to decide whether Republicans will nominate Attorney General Hill for a new term despite allegations of groping four women that resulted in a month-long suspension of his law license. (Robert Franklin/South Bend Tribune via AP, File)

INDIANAPOLIS (AP) — In a letter sent Friday to Gov. Eric Holcomb and leaders of the state General Assembly, Indiana Attorney General Curtis Hill questioned the governor's ability to continue issuing executive orders responsive to the COVID-19 pandemic and called for a special legislative session to “address public governance challenges” caused by the virus.

Hill contends the governor’s executive orders near the beginning of the pandemic were “unfortunate” but justified. There was an urgent public health crisis then, Hill said, and the governor's actions were needed to prevent “public disaster and chaos.”

Holcomb has signed 38 such orders since March, which have included statewide mandates on school and business closures, limits on public gatherings and requirements for mask-wearing and social distancing.

Now, however, Indiana's top lawyer says it's “debatable” whether Holcomb has the same “emergency authority” to continue issuing non-legislative policies. Enough time has passed now for “ordinary mechanisms of republican government” to find ways to function again, Hill said. As such, the attorney general argued in his letter that the grounds for Holcomb to continue issuing emergency orders “becomes shakier by the day” and that responsibility to respond to the coronavirus pandemic should shift to state legislators in the General Assembly.

“The remedy is to stop trying to address COVID-19 by temporary stop-gap measures and return to the mode of policymaking set forth in our Constitution,” Hill said in his letter.

Hill further complained that the governor’s executive orders have sent inconsistent and confusing messages to Hoosiers statewide. The attorney general said Holcomb has been unclear about which components of his executive orders are mandates and which are requirements. Hill also referenced recent anxieties experienced by Indiana schools leaders after mixed messages were released by both lawmakers and the governor over potential cuts to school funding as a result of the pandemic.

“Candidly, while Hoosiers at first mostly obeyed the Governor’s emergency orders, as those orders have endured, overreached, mutated, or proven impracticable, many citizens have begun to lose respect for them," Hill said.

A special session, the attorney general concluded, “is the only way" to “restore public confidence is constitutional government" and ensure consistency in public funding and relevant lawmaking during the pandemic.

Holcomb has been urged by legislative Democrats to bring the General Assembly back in a special session before its scheduled start in January. The goal, legislators said, is to craft laws relating to racial justice, school funding and vote by mail that take effect before a projected worsening of the pandemic this fall.

But the governor has not agreed, saying in July a special session wasn’t “on my agenda right now.”

Holcomb did not immediately reply to a request for comment on Hill's letter.

Hill’s bid for reelection was scuttled last month after he lost the Republican nomination for Indiana following a monthlong suspension of his law license over allegations that he groped a state lawmaker and three other women during a party. The governor and other legislative leaders responded in 2018 by calling for Hill to resign. Hill has denied wrongdoing.