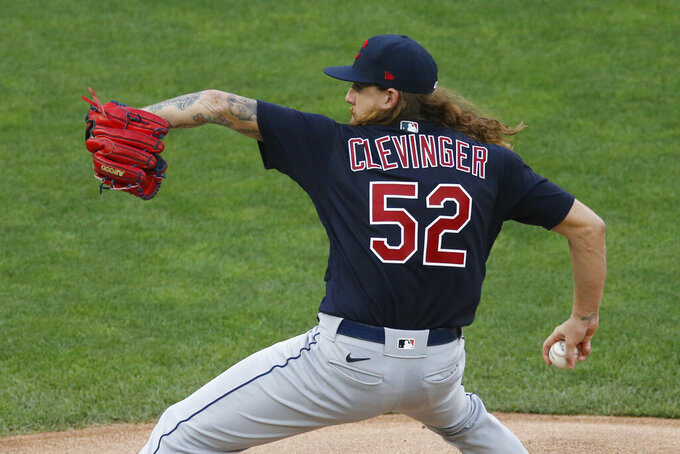 They've been sent away from the team, and it's not known when they'll be back.

Cleveland placed the two starting pitchers on the restricted list after the right-handers broke team rules and Major League Baseball protocols by leaving their hotel in Chicago last weekend and risking exposure to the COVID-19 virus.

“This one kind of hurts,” said Indians manager Terry Francona, who returned Tuesday from a week away to address a lingering medical issue to find his team dealing with an internal situation that could affect its season.

“We’ll deal with it like we always do,” Francona added. “We care about each other. It doesn’t mean you don’t get disappointed with each other or even mad at each other sometimes. But what I care about is making it better.”

Clevinger and Plesac went out Saturday night with a group of people following the Indians' win over the White Sox. The team had implemented a code of conduct for players to follow on road trips, forbidding them from socializing outside of the team's players and staff.

Once they learned about Plesac going out, the Indians immediately got him car service to drive him to Cleveland. But the team was not aware Clevinger had been with him until after he flew back to Ohio with his teammates, coaches and other personnel.

Clevinger released a statement on Tuesday, saying he broke the “implicit trust” of his teammates. He said the biggest mistake he made was “not immediately coming clean to my teammates.”

“I owe them better,” Clevinger said. “I now realize that by even exposing myself to just one person more than necessary, I am putting myself, my teammates, the guys I compete against, the umpires, the staff, the Indians organization as well as the game that I love at risk. There is no excuse for my actions, and I can only take responsibility and learn from my mistakes.”

Team president Chris Antonetti did not divulge any details of how the team learned about Clevinger's indiscretion. Antonetti said he has spoken with Clevinger and that the free-spirited 29-year-old understands he violated team rules.

They can't be 100 percent certain, but the Indians don't believe Plesac or Clevinger came in contact with anyone who has the virus. Both players will be tested Wednesday and the team will consult with medical experts based on those results.

Antonetti said the decision to put them on the restricted list was not mandatory, but the Indians felt it was appropriate given their actions.

“It’s not ideal,” he said. “But we felt it was the right thing to do. We said from the beginning, even if you go back to March 13, we will continue to prioritize the health and wellness of our players and staff. Based upon the behaviors of Zach and Clev, we felt that they had an elevated level of risk, so we wanted to make sure we did what we could do to protect the rest of our group.”

All-Star shortstop Francisco Lindor initially said he had “mixed feelings” about what transpired with his teammates, but he seems willing to forgive them.

“We're all humans,” he said. “We all make mistakes. However, trust is earned and they're going to work to gain our trust.”

Antonetti didn't know if Clevinger has spoken to his teammates. Plesac issued a statement on Sunday night, apologizing to the organization and fans for his reckless behavior, promising to be more vigilant and hoping his teammates will forgive him.

Antonetti said any further discipline for Clevinger and Plesac would handled internally. Francona indicated their teammates could have a role in any additional punishment.

“Not being vindictive, just trying to figure out how do we make this better so it doesn’t happen again,” he said. “The players will have a lot to say about this. Taking ownership of what we’re doing is really important.”

MLB permits teams to use the restricted list for players who are unavailable to play for non-baseball reasons. The players will be paid during their leave and be given service times. They can come off the list at any time.

Clevinger had been scheduled to pitch Tuesday's two-game series opener at home against the Cubs.

The Indians are obviously disappointed in Clevinger and Plesac, who have both pitched well for one of baseball's best staffs. But their questionable behavior is somewhat stunning given they risked contracting the coronavirus, which brought baseball to a stop during spring training in March and continues to spread across the country.

The St Louis Cardinals have had 15 games postponed due to an outbreak of the virus on their team.