Indians option OF Johnson to minors despite strong camp 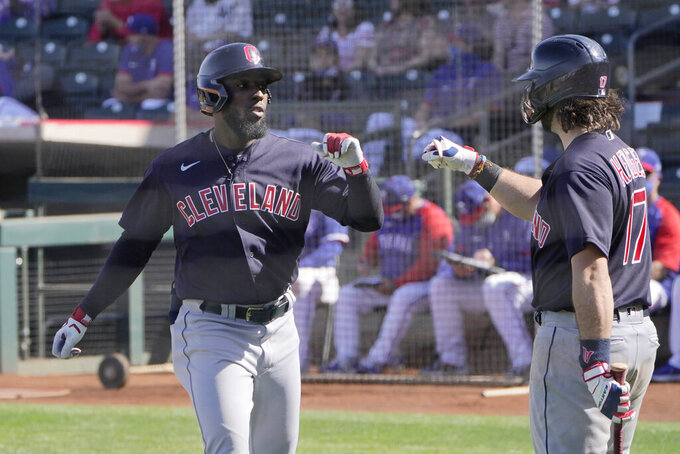 CLEVELAND (AP) — Daniel Johnson had a better spring training than any of Cleveland's outfielders, and all it did was get him sent to to the minor leagues.

Johnson was optioned to Triple-A Columbus on Friday as the Indians moved closer to finalizing their opening-day roster with a move that was tough on several fronts.

With the Indians looking to fill spots in right and center field, the 25-year-old Johnson performed as well as any of the outfielders competing by batting .368 (7 for 19) with two homers and four RBIs in nine Cactus League games.

Unlike some of the other outfielders in camp, however, Johnson still has options and because he didn't have a full minor league season in 2020 due to the COVID-19 pandemic, the Indians want him to get some extra work at all three outfield spots.

“He had a really good camp,” manager Terry Francona said. "And he was very disappointed and we knew that was going to be the case. With the way spring training is right now and has been, and the amount of people we have competing for spots, we knew we were going to have to make some tough decisions and this was one of them.

One of the top prospects in Cleveland's organization, Johnson didn't get any time playing center field during camp, and President of Baseball Operations Chris Antonetti said Thursday that was because this isn't a “normal” spring training.

Eddie Rosario will be Cleveland's starter in left field, but it's still unclear how things will shake out in the other two spots with non-roster invitee Ben Gamel, Bradley Zimmer, Oscar Mercado, Josh Naylor and Amed Rosario all in the mix.

Rosario, who came over from the New York Mets in the Francisco Lindor trade this winter, is getting a look in the outfield and had three errors in a start in center this week. The Indians aren't giving up on the experiment just yet, though.

Gamel, who signed a minor league deal with the Indians this winter, has made a favorable impression on the Indians. He can play all three outfield spots.

“This kid is so engaging,” Francona said when asked about Gamel's exuberant personality. "When you bring a guy in non-roster, you learn a lot about them. He just leaned into everything here. Whether it’s our culture, or our team and our organization competing, he leaned into all of it.

“We really have enjoyed him. We’ll see where it goes. We don’t have answers yet. But he’s done a really good job.”

The Indians have another big decision to make at first base between Jake Bauers and Bobby Bradley, who dropped 35 pounds in the offseason and has shown good power.