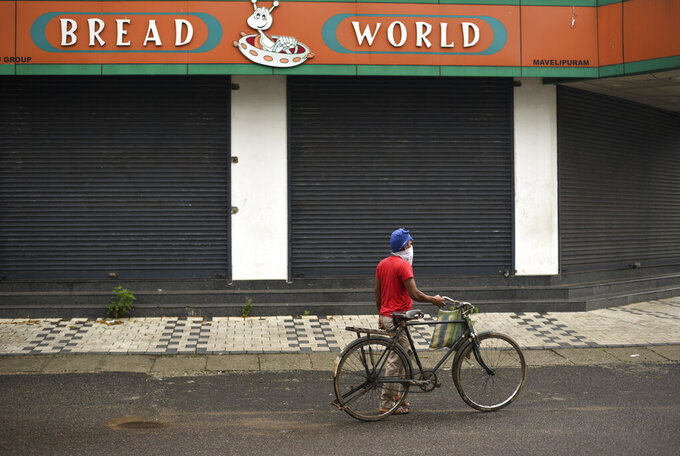 An Indian laborer walks with his bicycle past a bread shop before it opens in the morning in Kochi, Kerala state, India, Friday, May 22, 2020. India's central bank on Friday cut its key interest rate to 4% to revive the economy severely hit the coronavirus outbreak and a two-month lockdown. (AP Photo/R S Iyer)

NEW DELHI (AP) — India’s central bank on Friday cut its key interest rate to 4% to counter the blow to the economy from the coronavirus pandemic and a lockdown meant to contain it.

Reserve Bank of India Governor Shaktikanta Das forecast that the economy will contract in fiscal 2020-21. He did not give a specific figure. The IMF earlier forecast that India’s economic growth will fall to 1.9% in this fiscal year from 4.2% in 2019 and 6.1% in 2018. Some private sector economists expect it to contract by as much as 5%.

The Reserve Bank of India had reduced the interest rate to 4.4% from 5.15% in March to ease financing woes from the pandemic. The 4% rate announced Friday is the lowest the benchmark rate, the interest the central bank charges on lending to commercial banks, has been since March 2010.

In a policy meeting, the central bank said it would allow banks a 6-month moratorium on payments of installments on loans.

Das said data point to a collapse in demand in both the cities and the countryside, with plunging investment and consumer spending.

India’s merchandise trade slumped in April 2020, with exports shrinking by 60.3% and imports by 58.6%. There was a glimmer of hope, however, in a bumper winter crop of wheat and forecasts for a normal monsoon season in June-September, he said.

Das's announcement followed the recent announcement of a 20 trillion rupee ($266 billion) fiscal and monetary package to support the economy. Millions of workers have fled cities after losing their jobs as authorities imposed lockdowns to curb the spread of coronavirus.

The restrictions are scheduled to last through the end of May, but some have been relaxed, with shops gradually reopening and manufacturing and farming resuming. Train services and public transport have been partially restored, and domestic flights are expected to resume at one-third of capacity on selected routes from Monday.