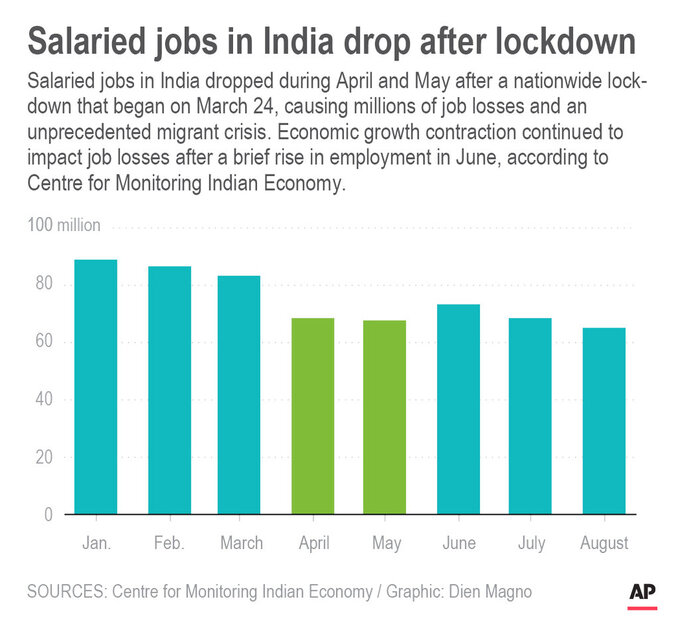 NEW DELHI (AP) — Millions of distressed Indian manufacturers and traders are counting on the eagerly-awaited October-December festive season to rescue them from their coronavirus catastrophe.

But spending may be the last thing on the minds of many Indians who have lost their jobs or businesses in the pandemic downturn, and pressure is building for Prime Minister Narendra Modi to do more to regain the momentum of growth that, at 8.2% in 2016-17, made India one of the fastest growing major economies.

The Hindu Dussehra, Diwali and Durga Puja celebrations that extend through the Christmas and New Year holidays are an occasion to splurge on big ticket items like gold, homes and cars as well as clothing, smartphones and electronics.

This year will likely lack the customary pomp and show, given the need for masks and social distancing with the pandemic still raging and no vaccine yet available.

The government began easing a stringent two-month-long lockdown in June, but business still is only a quarter to a fifth of usual and customers are scarce, said Praveen Khandelwal, general secretary of the Confederation of All India Traders.

That followed a 1.7 trillion rupees ($22 billion) economic stimulus package announced in March, including delivering rations of grain and lentils for 800 million people, some 60% of the world’s second-most populous country.

Other subsidies included a meager cash grant of 6,000 rupees ($80) a year each for 86 million poor farmers and free cooking gas cylinders for 83 million poor women until the end of September.

The economy still contracted an unprecedented 24% in the April-June quarter, with another downturn forecast for July-September.

The government needs to do more, said Nobel laureate Abhijit Banerjee, such as direct cash transfers for the poor and others severely affected by the prolonged lockdown. India's pandemic assistance has amounted to only about 1% of its GDP, he said, compared with the U.S.'s package in March of about 10% of its GDP.

Modi’s administration is hard strapped to push out more stimulus, however, given the financial demands of dealing with the pandemic on top of military tensions with China along a disputed border in the mountainous Ladakh region, where both sides have amassed tens of thousands of troops.

Defense analysts estimate India may need up to 1 billion rupees ($13 million a day to run its military machine at an altitude of 16,000 feet (4,875 meters) if the two countries fail to defuse their months-long faceoff.

The lockdown imposed in late March cost more than 10 million impoverished migrant workers their jobs in the cities. Many made grueling journeys back to their hometowns and villages. Now they face the ordeal of trying to get back to their factory jobs.

“There is almost no work,” said Ram Ratan, 46, who was working in a printing company before he returned to his home village in April. “We keep roaming around, looking for some steady work, but most factories don’t let us in.”

Mansoor Ansari is among hundreds of workers who wait every day on what is called a “labor roundabout,” in an industrial area, hoping to get picked up by employers.

Before the pandemic lockdown, Ansari had a steady job at a garment factory in the industrial town of Manesar near New Delhi, earning $200 a month, he said. He was able to pay rent and send money to his wife and five children in a village in eastern Bihar state.

As Ansari’s factory shut down, he joined a caravan of workers who walked several miles before jumping on to overcrowded flatbed trucks to get home.

Unable to find work there, and digging himself deeper into debt, after restrictions were lifted Ansari joined the legions of workers returning to Manesar.

Deshraj, who uses one name, lost his job as a waiter at a roadside eatery in Surat, a city in western India known for diamond cutting and polishing, in the spring and resumed farming in his home village. But unusually heavy rains in April damaged the crop.

“This is a common story in villages where crops have been destroyed by unseasonal rains, leading people to commit suicide,” said Raja Bhaiya, who runs a non-governmental organization to help farmers.

Compared to the scale of need, government relief has been “meager," Raghruram Rajan, former governor of the Reserve Bank of India, said in a Linked In post. He likened such help to a tonic.

“When the disease is vanquished, it can help a patient get out of her sickbed faster,” Rajan said. “But if a patient has atrophied, a stimulus will have little effect.”

The government maintains that the worst is behind.

Agriculture overall is growing at a 3.4% pace. With good monsoon rains, India might attain a record of 301 million metric tons of food-grain output, including wheat, rice, oil seeds, lentils and mustard, in the 2020-21 financial year -– 4 million metric tons more than in 2019-20.

“In a V-shaped recovery, it is possible that the slope (of rise) actually may not always be the same exactly as that of the fall, which is a drastic one,” he said.

One other bright spot: Domestic brands are getting a boost from a trend to boycott inexpensive Chinese-made statues of Hindu deities, festive LED lights and electronics that have flooded the market, in favor of locally made products, said Khandelwal.

For India's nearly 70 million traders, who employ about 400 million people, an upturn could not come fast enough. They are keeping their finger crossed and trying not to let their hopes get too high as the festive season approaches.

Sanyam Jain, 24, and his brother Ankit Jain, 31, owned three clothing shops in New Delhi and its suburbs, each store averaging more than $25,000 in monthly before the lockdown.

They’ve shut one store and would be happy to sell even half of their inventory this year.

“The government hasn’t given us any relief at all,” said Ankit Jain said.

Sales usually pick up 20-25% during the holidays, said Nitin Makkar, who runs a store in Noida on the outskirts of New Delhi, the capital. ``I have no such hopes this time as people may restrict themselves to buying essentials and avoiding luxurious items.”