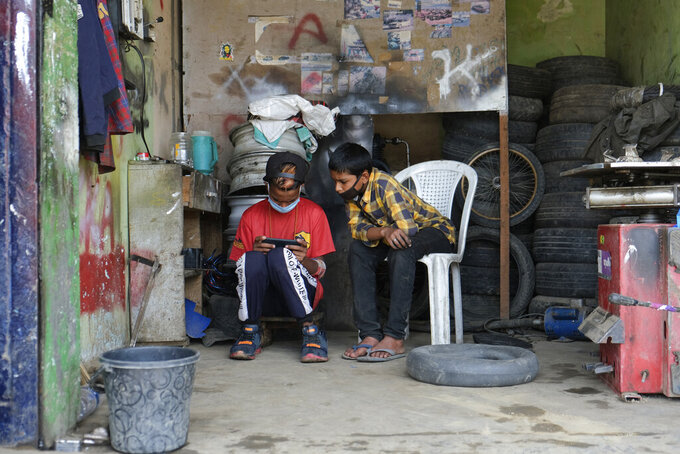 Boys wearing face masks take a break as they work at a tire repair shop in Kohima, capital of the northeastern Indian state of Nagaland, Friday, May 29, 2020. India’s economic growth will fall to 4.2% in financial year 2019-20 as compared to 6.1% in the previous year and likely to contract this year because of the coronavirus pandemic. Millions of workers have fled cities after losing their jobs as authorities imposed the lockdown in March and started easing it early this month to promote economic activity. (AP Photo/Yirmiyan Arthur)

NEW DELHI (AP) — India’s economy grew by 4.2% in the fiscal year that ended in March, down from 6.1% the previous year, the government said Friday, and is likely to contract this year because of the coronavirus pandemic.

The growth dipped to 3.1% in January-March, the last quarter of the fiscal year, as the country began feeling the effect of the pandemic, the Ministry of Statistics and Program Implementation said.

It said in a statement that the estimate may be revised as more data is gathered from businesses affected by a nationwide lockdown imposed on March 25 that is currently scheduled to end on Sunday. The government has not yet said whether it will be extended.

There was no indication of any government action to spur demand and “instead it was pushing the country into deep debt through lofty claims of stimulus package to counter COVID-19," said Gourav Vallabh, a party spokesman.

Last week, India’s central bank cut its key interest rate to 4% in an attempt to counter the blow to the economy from the pandemic and the lockdown meant to contain it.

Reserve Bank of India Governor Shaktikanta Das forecast that the economy will contract in fiscal 2020-2021. He did not give a specific figure. Some private economists expect it to contract by as much as 5%.

The package included income tax cuts, liquidity injections for cash-strapped companies and government-backed bank loans. It also said it would bar foreign companies from competing in bidding for government contracts of up to $26 million to promote self-reliance and protectionist policies.