As India's surge wanes, families deal with the devastation 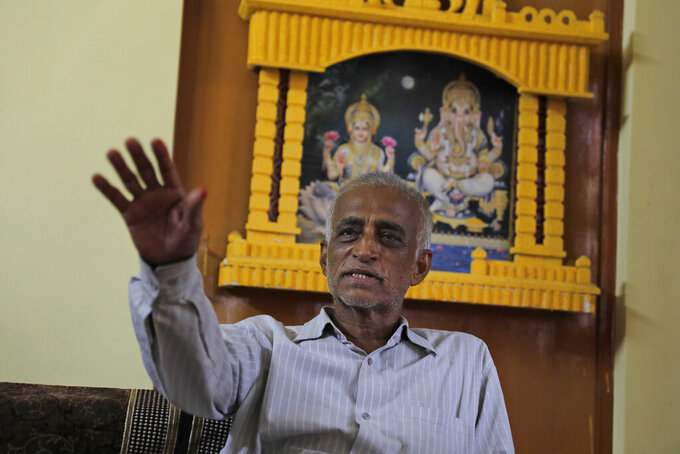 Radha Gobindo Pramanik speaks to the Associated Press inside his home in Lucknow, India, Thursday, June 3, 2021. Two months ago Pramanik and his wife threw a party to celebrate their daughter's pregnancy and the upcoming birth of their long-awaited grandchild. They were so happy that they paid little attention to his wife's cough. Within days, his wife, his daughter and his unborn grandchild were all dead, among the tens of thousands killed as the coronavirus ravaged India in April and May. (AP Photo/Rajesh Kumar Singh)

LUCKNOW, India (AP) — Two months ago Radha Gobindo Pramanik and his wife threw a party to celebrate their daughter's pregnancy and the upcoming birth of their long-awaited grandchild. They were so happy that they paid little attention to his wife's cough.

It's an oversight that may forever haunt him. Within days, his wife, his daughter and his unborn grandchild were all dead, among the tens of thousands killed as the coronavirus ravaged India in April and May.

“Everyone whom I loved the most has left me,” the 71-year-old said on a recent night as a Hindu priest chanted mantras and performed a ritual for the dead at his home in the northern city of Lucknow. “I am left alone in this world now.”

As India emerges from its darkest days of the pandemic, families across the country are grieving all that they’ve lost and are left wondering if more could have been done to avoid this tragedy.

There are also signs that the virus is not done devastating India’s families because even as new infections are down, thousands are still dying each day and the illness is believed to be spreading undetected in areas without access to testing.

Ruby Srivastava lost her family in a single week in April. First her mother and father to the virus. Then her brother to a motorcycle accident. And finally her grandmother to shock.

Now the 21-year-old is left dealing with the insurmountable pain and the questions she asks herself.

She wonders if things might have been different if her father, a government worker in Lucknow, hadn't been called away to help hold local elections in their state of more than 200 million people.

Health experts had warned against holding the polls. Fearing the virus, many of the hundreds of thousands of government workers ordered to help out had begged not to go. But the ruling Bharatiya Janata Party’s government in Uttar Pradesh state insisted the vote would go ahead as planned.

For four days, more than 1.3 million candidates fought for nearly 800,000 seats. Tens of millions voted as the virus spread unchecked.

In the days that followed, scores of government employees who worked the polls would die. One teachers union said 1,600 educators alone were killed, many of them complaining of fever and breathlessness.

Srivastava wonders what would have happened if her father's superiors believed him and hadn't denied his requests for sick leave until finally he fainted in his office and was sent home.

She wonders if her father could have been saved had he gotten better treatment at the government-run hospital they took him to before deciding they would take care of him themselves at home.

At the height of the surge, Indian hospitals were overwhelmed and life-saving drugs and oxygen were were in short supply. People were dying on their way to health centers, gasping for breath. Families were panicking.

Once back home, Srivastava's family paid an exorbitant price for an oxygen cylinder for her father. They were so relieved they almost didn't notice that her mother was also coughing.

“Our full attention was on our father,” Srivastava said. “So we did not realize that she was also facing problems.”

Her mother's situation quickly grew worse and on April 22 she died. A day later so did her father.

After their cremations, Srivastava's younger brother was taking their ashes on his motorcycle for a ceremony to immerse them in the Ganges River when he was killed in an accident. Three days after that, her heartbroken grandmother died of cardiac arrest.

Srivastava’s entire family had been wiped out in a few devastating days.

Pramanik also has regrets about his family's final days.

Most of all he wishes he had paid attention to his wife's cough and off-and-on fever and never held the party for his daughter, Navanita. They had been so excited that their daughter was finally pregnant after nine years of trying and had grown complacent with health protocols at a time when they thought they were safe from the virus.

Friends suggested his wife get tested for COVID-19, but she refused.

To make matters worse, the day after the party he and his wife traveled to Navanita's house on the fringes of the capital. There the two women talked all night, making arrangements for the baby's birth in June.

Within 24 hours Pramanik's wife's fever returned, she complained of breathlessness and she was hospitalized. Three days later she died.

Distraught, the father and daughter returned to Lucknow by train. A promise was made that Navanita would take care of him.

When they got home, Navanita started showing symptoms.

Over the next five days the virus took over her body. She was hospitalized and finally shifted to an intensive-care unit and hooked up to a ventilator.

On the night of April 17, Pramanik and his son-in-law sat outside the ICU trying to console one another. Together they wept.

The next morning, doctors told them they needed to find a better-equipped medical facility for Navanita. Frantic calls around the city were met with refusals. Beds were full nearly everywhere.

After hours of trying, they finally found space for her. It was too late. Navanita died on the way to the new hospital, her unborn child inside her.

Two months later, Pramanik is still wracked with guilt. If only he had made different decisions, he tells himself, his wife and daughter would still be alive. He would be a grandfather.

“Sometimes I feel I have killed my wife and daughter,” he said. “This thought keeps me awake the whole night.”