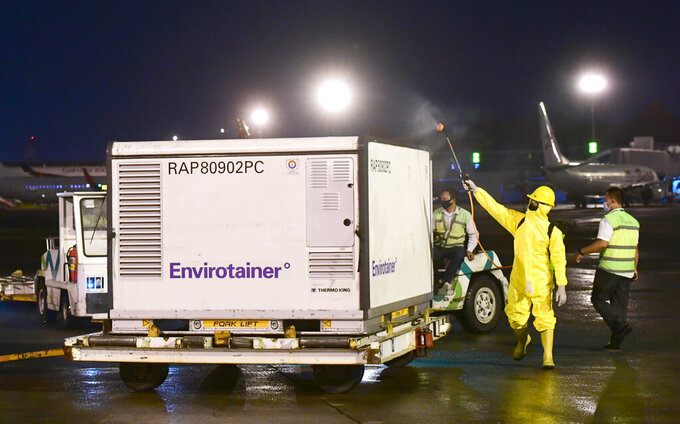 In this photo released by the Indonesian Presidential Palace, workers spray disinfectant over a container containing experimental coronavirus vaccines made by the Chinese company Sinovac, upon arrival at the Soekarno-Hatta International Airport in Tangerang, Indonesia, late Sunday, Dec. 6, 2020. Indonesia's government said more than a million doses of an experimental COVID-19 vaccine developed by China-based biopharmaceutical company Sinovac Biotech arrived in the country late Sunday and more are expected to arrive in early January. (Indonesian Presidential Palace via AP)

The certification would be a significant step in immunization efforts in the world’s most populous Muslim-majority country, should the vaccine be approved for use.

“A study by the Indonesian Ulema Council Halal Product Guarantee Agency and Institute for the Assessment of Food, Drugs and Cosmetics has been completed and has been submitted to the council for the making of a fatwa and halal certification,” Human Development and Culture Minister Muhadjir Effendy said at a news conference.

Over 1 million doses of the experimental COVID-19 vaccine developed by Sinovac arrived in Indonesia on Sunday evening. The government has no exact schedule for distributing the doses.

Health Minister Terawan Agus Putranto said Monday that the experimental vaccine needs to successfully complete phase-three clinical trials before it can be distributed in Indonesia.

“The government will provide a vaccine that is proven safe and passes clinical trials under World Health Organization recommendations,” Putranto said.

Hermawan Saputra of the Indonesian Public Health Expert Association said the 1.2 million doses are only enough for an initial group of 600,000 people, since each person must receive two doses. “It does not really have significant meaning. The government should guarantee that there will be enough to for distribution to the entire country,” Saputra said.

Saputra said that if the experimental vaccine passes the third-phase clinical trials, immunization programs are expected to begin in the middle of next year.

The government has announced that it plans to use vaccines from several different producers in its effort to vaccinate the world’s fourth most populated country. So far, the Sinovac candidate vaccine is the only one to arrive in the country.

Monday, the Health Ministry announced 5,754 new COVID-19 cases, bringing the confirmed total to 581,550, including 17,867 deaths, the highest in Southeast Asia.