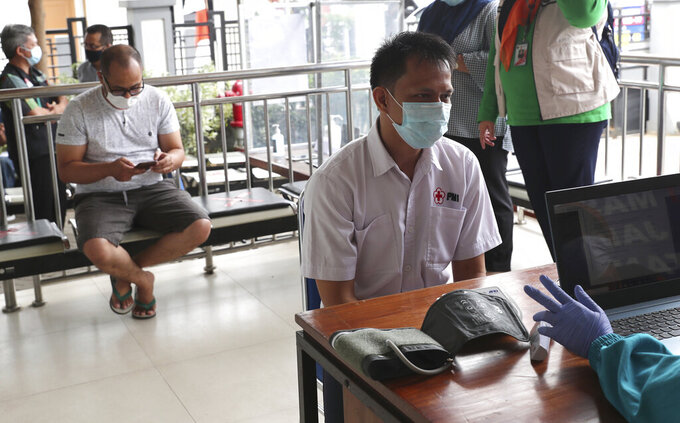 The Health Ministry is planning to vaccinate more than 1.3 million health workers and 17.4 million public officials in the first stage.

Indonesia, the world’s fourth most populous country, plans to vaccinate two-thirds of its population of about 270 million people — or just over 180 million people.

“The pandemic is still going on and health care workers are the front-liners in caring for COVID-19 patients,” Deputy Health Minister Dante Saksono said.

The first 25 health workers to get the jab were employees of Jakarta's Cipto Mangunkusumo Hospital.

Hospital Director Lies Dina Liastuti said a total of 6,000 will be vaccinated at a rate of 275 a day.

Indonesia’s Food and Drug Authority green-lighted emergency use authorization of the vaccine produced by China's Sinovac Biotech Ltd., after the country's highest Islamic body last week said the shot is fit for consumption by Muslims. Indonesia is the world's most populous Muslim nation.

The Health Ministry expects it will take 15 months for Indonesia to complete the vaccination program, through March 2022.

The rollout comes as Indonesia registered the daily record in COVID-19 infections and fatalities on Wednesday, with 11,278 cases and 306 deaths in the last 24 hours. The country has recorded more than 858,000 infections and over 24,900 deaths in total.

Some scientists warn that not enough data has been published about the effectiveness or safety of the Sinovac vaccine — and there is uncertainty over just how protective it is. It has yet to be tested in tens of thousands of people in the kind of rigorous study considered necessary before being licensed for wide use.

Researchers in Brazil last week had pegged the vaccine as 78% effective at protecting against symptomatic illness — but this week, after a closer look at mild cases, they announced data showing overall, effectiveness is just over 50%.