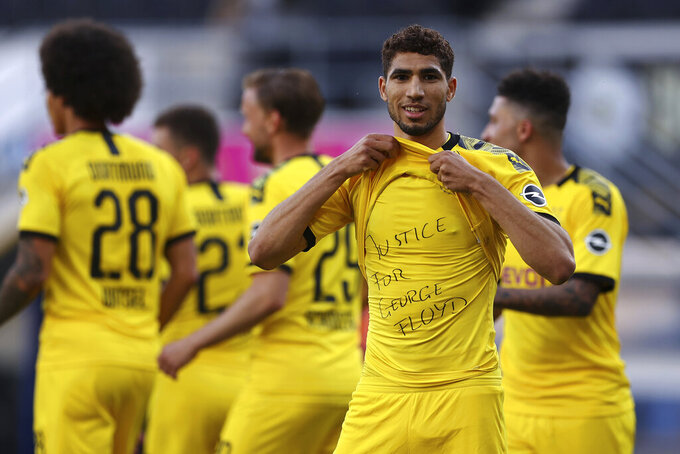 Achraf Hakimi Mouh of Borussia Dortmund celebrates scoring his teams fourth goal of the game with a 'Justice for George Floyd' shirt during the German Bundesliga soccer match between SC Paderborn 07 and Borussia Dortmund at Benteler Arena in Paderborn, Germany, Sunday, May 31, 2020. Because of the coronavirus outbreak all soccer matches of the German Bundesliga take place without spectators. (Lars Baron/Pool via AP)

FIFA President Gianni Infantino stepped into the debate about Bundesliga players who protested during matches against the death of George Floyd, saying Tuesday that they should be applauded and not punished.

Borussia Dortmund winger Jadon Sancho was booked for taking off his jersey during a Bundesliga match so he could display a T-shirt emblazoned with “Justice for George Floyd."

Dortmund teammate Achraf Hakimi and Schalke midfielder Weston McKennie carried the same messages on their body at the weekend in a technical breach of the game's laws that led to the Germany soccer federation saying it was considering a disciplinary case despite expressing pride in their actions.

Floyd, a black man and former community college basketball player, died after a white police officer pressed his knee into Floyd’s neck for several minutes even after he stopped moving and stopped pleading for air. His death has sparked protests across the United States and in other countries.

“For the avoidance of doubt," Infantino said, "in a FIFA competition the recent demonstrations of players in Bundesliga matches would deserve an applause and not a punishment."

Infantino's comments were published in a statement by FIFA and were set to feature in a letter to all 211 member associations. The statement also urged leagues to apply “common sense and have in consideration the context surrounding the events.”

The laws of the game prohibit “any political, religious or personal slogans, statements or images" on equipment.

“Football is a sport which encourages tolerance, inclusion and justice,” UEFA President Aleksander Ceferin said. “These are the same values being espoused by those showing solidarity to George Floyd.”

UEFA is hoping to resume the Champions League and Europa League in August after being suspended due to the coronavirus pandemic.

“If a player in our competitions were to display a message or act symbolically to ask for equality for human beings,” Ceferin said, "the circumstances around the event should be taken into account in line with UEFA’s zero tolerance against racism.”

The English Football Association has already said it will adopt the stance urged by FIFA. The Premier League is due to resume on June 17 and clubs have been showing solidarity with Floyd.

Players from Chelsea, Liverpool and Newcastle have been pictured this week in training taking a knee as part of anti-racism gestures.

“Where any behaviors or gestures on the pitch that may constitute a breach of the laws of the game have to be assessed, they would be reviewed on a case by case basis with a common sense approach and understanding of their context,” the FA said earlier in a statement when asked about players’ tributes to Floyd.