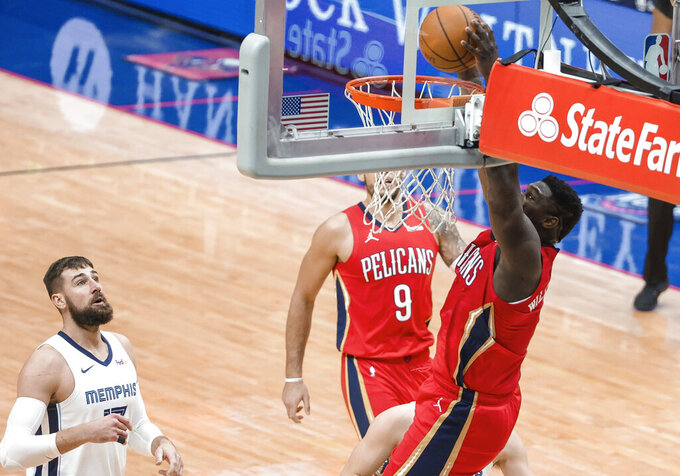 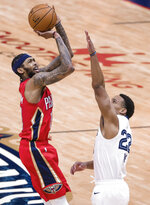 NEW ORLEANS (AP) — Brandon Ingram had 27 points, 12 rebounds and a career-high four blocks, Zion Williamson capped a 29-point night with a game-sealing dunk in the final minute, and the New Orleans Pelicans beat the Memphis Grizzlies 118-109 on Saturday for their third straight victory.

Eric Bledsoe scored 11 of his 21 points in the fourth quarter, when New Orleans fell behind by seven before storming ahead by outscoring the Grizzlies 23-7 over the final seven minutes. Lonzo Ball added 16 points for New Orleans, which broke open a close game despite playing one night after pulling out a tight road game in Indiana.

“Everybody just got super aggressive. The momentum shifted a little bit,” Ingram said of the final stretch. "We stayed in and we knocked down shots and we got stops on the defensive end. So it all came down to the fourth quarter where we had to bring a little extra energy off of a back-to-back. We just couldn’t make (being) tired an excuse, and just kept going.”

Jonas Valanciunas returned from a five-game absence because of COVID-19 protocols and scored 23 points in 24 minutes for the Grizzlies.

“He really attacked it well tonight and defensively did some good things,” Memphis coach Taylor Jenkins said. "Obviously, his minutes will continue to go up and up as he gets back and reconditions. He was really good for us tonight.”

Kyle Anderson scored 21 for Memphis, and Ja Morant had 16 points and nine assists. But it wasn’t enough to prevent the Grizzlies from losing their third straight.

After the teams were separated by a single point at halftime and the end of the third quarter, Memphis appeared to be taking control when Tyus Jones scored six of his eight points during an 11-2 run that put the Grizzlies up 102-95.

Bledsoe then hit two 3s and a driving 10-foot floater during a 10-2 surge that vaulted New Orleans back in front to stay. Bledsoe and Ingram each added 3s inside the last three minutes to help secure the win.

“I just try to play off my teammates as best I can,” Bledsoe said. "When I do get the open looks, shoot and just try to be aggressive when I have the ball.”

Memphis hit 10 3s in the opening half, including two by Valanciunas, who scored 15 points in his first 11 minutes off the bench.

The Grizzlies led by 12 when Anderson's driving reverse layup made it 49-37.

New Orleans still trailed by 10 with just more than three minutes left in the half, but Ingram hit a 3 and Ball threw down a two-handed, alley-oop dunk on a fast-break feed from Bledsoe, sparking an 11-0 run.

Ingram, who had 17 first-half points, added a pair of mid-range jumpers during the run and Bledsoe's transition layup briefly gave New Orleans the lead before Anderson's free throws put Memphis up 61-60 at halftime.

Grizzlies: F Brandon Clarke was scratched because of soreness in his right calf. ... Grayson Allen returned from a four-game absence related to COVID-19 protocols and scored eight points. ... The Grizzlies finished 13 of 39 from 3-point range and shot 44.4% (40 of 90) overall.

Pelicans coach Stan Van Gundy made a point of crediting Ingram and Williamson for their play on defense and the trust they showed in their teammates on both ends of the court.

Williamson got his points on just 14 shots, including three thunderous alley-oop dunks, and also had five assists, four defensive rebounds and two blocks. Ingram shot 55% (11 of 20) and assisted on three baskets.

“We tried to get the ball in the hands of our best players," Van Gundy said. "Zion and Brandon had the ball all the time and they did a good job. They made plays, and that’s what you rely on them to do. ... Right now, they’re really trusting their teammates and their teammates are delivering.”

Grizzlies: Host the Toronto Raptors on Monday in the first of two home games in three nights.

Pelicans: Host the Houston Rockets on Tuesday night before embarking on a four-game road trip.