Injured Jays OF Springer to play in intrasquad game Friday 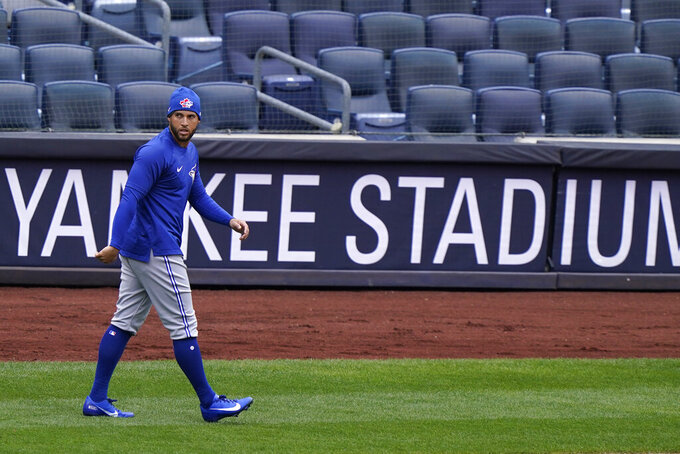 TORONTO (AP) — Blue Jays outfielder George Springer will play in an intrasquad game Friday, the next step on his return from two strained muscles that have delayed his Toronto debut.

Springer signed a team-record $150 million, six-year deal with the Blue Jays this offseason but missed time in spring training, first because of a strained oblique and later because of a right quadriceps strain.

The World Series MVP when Houston won its first title in 2017, Springer could return in this weekend’s road series against the Tampa Bay Rays, according to general manager Ross Atkins.

“He’s doing all baseball activity, he’s extremely confident and strong,” Atkins said. “Now it’s just a matter of recovery and putting him in a position to play nine innings and feel like he can face elite major league pitching. Tomorrow will be a very important day to determine what that next step is and what’s best for him.”

Outfielder Tesocar Hernandez, out since April 8 after being infected with COVID-19, will take a clearance test Friday, Atkins said, and could soon rejoin the team.

Also Thursday, the Blue Jays acquired right-hander Jeremy Beasley from Arizona for cash. Beasley, who will report to Toronto’s alternate site, made his big league debut with the Diamondbacks last August 11, striking out one of the three batters he faced before a season-ending shoulder injury.

Right-hander Thomas Hatch (shoulder) was transferred to the 60-day injured list to make room on the 40-man roster.