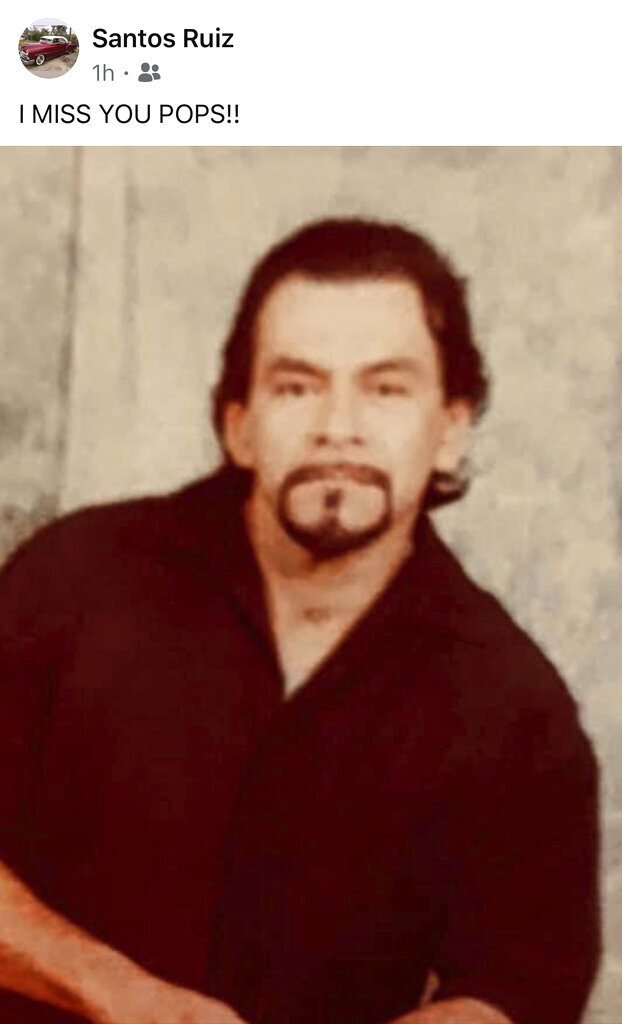 This undated photo posted on social media and provided by the Ruiz Family shows Daniel Ruiz. The family of Ruiz, a 61-year-old California inmate who died of the coronavirus, sued state corrections officials Tuesday, March 16, 2021. The family blames a botched transfer of infected inmates to San Quentin State Prison that killed 28 inmates and a correctional officer in 2020. (Angel Ruiz Corona/Courtesy of Ruiz Family via AP)

The lawsuit says he had several risk factors, including asthma, obesity, Hepatitis C and Chronic Obstructive Pulmonary Disease. By the time his family found out he'd been infected, he'd been in a hospital intensive care unit for two weeks, was on a ventilator, and was near death.

His family's attorneys said it's the first such federal civil rights lawsuit stemming from officials' decision to transfer 122 inmates from the California Institute for Men near Los Angeles to the prison north of San Francisco in late May, before they had been properly tested.

But a class-action lawsuit is pending in Marin County Superior Court on behalf of inmate Steven Malear and what that suit said were at least 1,400 other San Quentin inmates infected in a transfer that state officials have acknowledged was disastrous, if well-intended.

Malear's suit was filed in late July. By the end of August, 2,237 inmates and 277 employees at the facility were infected. The prison, which also houses the state's death row, once again has zero active cases as it did before the transfer, according to a department online tracker.

The state was seeking to have that lawsuit dismissed, said attorney Charles Kelly.

Corrections department spokeswoman Terry Thornton said officials had not yet been served with the Ruiz family's lawsuit and will evaluate it once it is received.

Michael Haddad, one of the family’s attorneys, said the transfer caused “the worst prison public health debacle in California history,” a criticism echoed by some state lawmakers. The state's inspector general last month similarly said the state's misguided attempt to protect inmates from the coronavirus at the Southern California prison “caused a public health disaster” at San Quentin.

Corrections officials compounded the tragedy by not informing Ruiz's family of his infection or hospitalization and barring officials at the outside hospital from telling his relatives, said Julia Sherwin, another family attorney.

Prison doctors then "appointed themselves to be Daniel’s medical surrogates, to make important medical decisions for Daniel that his family had the right to make for him,” she alleged.

The suit was filed by Ruiz's mother and four of his children, who said they had to watch him die on a Zoom call.

“It was devastating to see him like that,” his younger sister, Angel Ruiz Corona, said in a statement. “We knew we were going to lose him but hoped he could hear us and know he wasn’t alone.”

He was their mother's first-born child, “and she is so heartbroken. It seems like she wishes she could be with him already,” Ruiz Corona wrote.

Unrelated to the San Quentin transfer, a third lawsuit filed in Monterey County Superior Court in February accuses officials at the Correctional Training Facility in Soledad of causing a “super-spreader" event by pulling Black inmates from their cells in the middle of the night during what the warden has said was a properly executed gang investigation in July.

That pending class-action lawsuit alleges widespread racist behavior and comments by correctional officers during the investigation, but also says that holding the inmates in close quarters without masks while their cells were being searched eventually led to 2,700 coronavirus cases and 17 deaths at the prison south of San Francisco.

The peak of those infections came in January, when there also were widespread infections throughout the prison system and California in general during the state's worst wave of the pandemic.

This story has been corrected to show Ruiz's scheduled release date was in 2021.