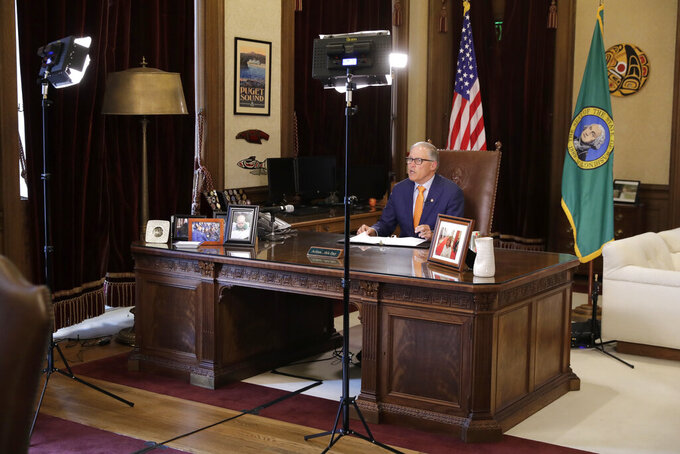 Washington Gov. Jay Inslee sits at his desk and rehearses a speech Tuesday, April 21, 2020, at the Capitol in Olympia, Wash., minutes before going live to address the public on the state's next steps in addressing the outbreak of the coronavirus. Inslee said the state will not be able to lift many of the stay-at-home restrictions implemented to fight the coronavirus by May 4, the date through which the existing directive is currently in place. (AP Photo/Ted S. Warren)

OLYMPIA, Wash. (AP) — Washington Gov. Jay Inslee said Wednesday the stay-at-home order is working to slow the spread of the coronavirus in the state, noting that while some may not agree with his decisions, any changes will be based “on data and science.”

Inslee's comments come as the sheriff of Washington state’s third largest county said he won’t enforce the order, saying it violates people’s constitutional rights, and after a vote Tuesday by the board of commissioners in Franklin County to reopen businesses in the county. One of the commissioners said Wednesday he regretted his vote and a meeting was scheduled Thursday to consider rescinding their resolution rejecting the stay-home order.

“Our office will not be guided by irrational forces that would really gamble with our health,” Inslee said. “If we placed that bet and lost we would be giving up the hard-won gains that we have already made because of the dedication of Washingtonians to this order.”

Snohomish County Sheriff Adam Fortney announced his position on Facebook Tuesday night, following a statewide address by Inslee in which the governor said the state will not be able to lift many of the stay-at-home restrictions implemented to fight the coronavirus by May 4. That's the date through which the current directive is currently in place — but Inslee hopes health modeling in the coming days will allow resumption of some activities.

Attorney General Bob Ferguson tweeted Wednesday that he would be reaching out directly to Fortney. And after Inslee’s general counsel sent a letter to the county administrator of Franklin County on Wednesday, saying the vote there violates state law, Franklin County Commisioner Brad Peck said while he thought the governor overstepped his authority, his vote on Tuesday was a mistake.

“The county commissioners have got a real responsibility to do these things judiciously,” Peck said.

Also Wednesday, Republican gubernatorial candidate Joshua Freed sued Inslee in federal court, challenging the current prohibition on religious gatherings under the stay-at-home order. The complaint contends the prohibition is a violation of First Amendment rights pertaining to religious freedom, free speech and assembly, though Inslee said Wednesday that nothing in his order prohibits people from worship and that many religious establishments have set up systems for people to electronically congregate.

Inslee has said a return to public life will take a series of steps and that until several markers are met — including adequate testing and a vaccine — preventing an increase in new cases is the main priority. And on Tuesday night he announced a plan to have about 1,500 workers focused solely on contact tracing in place by the second week of May.

Inslee said the the state health officer believes the spread of COVID-19 is likely declining in Washington state, based on data on hospitalizations, confirmed cases and deaths, but he still urged caution.

Inslee said the vast majority of the state is following the stay-at-home order, and said he wants “Washingtonians to continue to take care of themselves and their neighbors.”

“Look, this has been working,” he said. “This is saving lives. There are people alive today because of the work we’ve done jointly in the state of Washington. Now is not the time to give up.”

About 12,500 people in Washington state have tested positive for the virus and at least 692 have died. The virus causes mild to moderate symptoms in most patients, and the vast majority recover. But it is highly contagious and can be spread by those who appear healthy and can cause severe illness and death in some patients, particularly the elderly and those with underlying health conditions.

House Republican Leader J.T. Wilcox said he believes the virus is serious, but warned public patience is hitting a tipping point if some lifting of restrictions don't occur soon. He said Wednesday there are inconsistencies with what businesses are considered essential and non-essential, noting that while public construction is allowed, private construction still is not. Inslee has said private construction may start up again soon, but hasn't given a timeline, saying that he hopes to have additional modeling Thursday to inform his decision.

“I'm not arguing that we should be less safe. I’m arguing the fact that he’s losing legitimacy is making us less safe,” Wilcox said of Inslee. “And this is from someone who has gone a long way to support him.”

Wilcox said that he hopes the governor soon lays out exact metrics and goals to the public for reopening the economy, and specific steps that businesses can start taking to reopen their doors, even if it is in phases.

There have been mounting calls from some groups for Inslee to ease the state’s stay-at-home order, and a weekend protest drew about 2,500 to Olympia.

However, a new survey finds Americans remain overwhelmingly in favor of stay-at-home orders and other efforts to slow the spread of the coronavirus. A majority say it won’t be safe to lift such restrictions anytime soon. The survey from The Associated Press-NORC Center for Public Affairs Research found only 12% of Americans say measures to fight the outbreak where they live go too far. About twice as many believe the limits don’t go far enough.